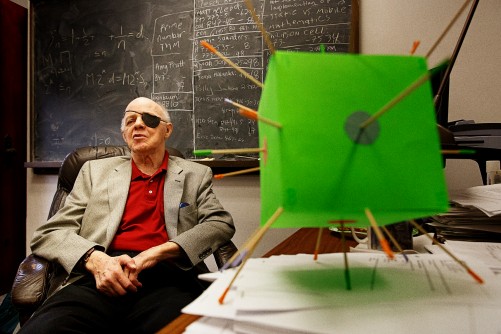 The late Paul J. Sally, Jr., is the first recipient of the American Mathematical Society's Award for Impact on the Teaching and Learning of Mathematics.

Newswise — Paul J. Sally, Jr., of the University of Chicago has been awarded the first American Mathematical Society Award for Impact on the Teaching and Learning of Mathematics, the society announced today. Sally passed away unexpectedly on December 30, 2013, but news of the award reached him shortly before his death. He took great pleasure in knowing that he was the first recipient of this award. Established in 2013 by the AMS Committee on Education, the award is given annually to a mathematician (or group of mathematicians) who has made significant contributions of lasting value to mathematics education. The endowment fund that supports the award was established by a contribution from Kenneth I. and Mary Lou Gross in honor of their daughters, Laura and Karen. “Paul Sally was a remarkable human being, unique for his accomplishments across the full spectrum of mathematics, from pioneering research contributions and advising of doctoral students to his work with talented middle school students and with K-12 teachers,” said Kenneth Gross, a mathematician at the University of Vermont. No one is more deserving of being the inaugural recipient of this award. He sets the highest standard for those who will follow.” Tall, bald, and wearing a black eye patch (he lost his vision to diabetes), Sally was sometimes called “Professor Pirate. His jocular and even light-hearted manner coexisted easily with the steely will and no-nonsense approach he brought to his work. Heart and soul a teacher, he had a special gift for communicating mathematics to a wide range of people. Sally combined cutting-edge research with a parallel life-long commitment to education at all levels. As director of undergraduate studies at UChicago’s math department for more than 30 years, he was a leading voice in the undergraduate program. But what truly distinguishes Sally and makes him an ideal recipient of the first AMS Impact Award, according to the society. is his work with teachers and students at the precollege level, which began in the 1960s and continued unabated until the day of his death. Among his most important contributions are the Seminars for Elementary Specialists and Mathematics Educators (SESAME), a program designed to strengthen the mathematical background of teachers in the Chicago Public Schools, the second largest school district in the US, and the Young Scholars Program (YSP) for talented high school students from underprivileged backgrounds.

Sally also cofounded and served as director of UChicago’s School Mathematics Program (UCSMP), which has had a major national impact; spearheaded the founding of the Chicago Algebra Initiative; and led the mathematics component of Chicago’s Urban Teacher Education Program (UTEP). Along with publishing many research papers and authoring several books, Sally produced 19 PhD students in his area of research, harmonic analysis on semisimple groups over real and p-adic fields. He was active in the AMS, serving for example on the Board of Trustees, the Committee on Science Policy, and the Council. An endowment created by Sally provides part of the funding for the Arnold Ross Lectures that the AMS sponsors each year. Sally received several awards for his work, including the Distinguished Service Award of the AMS (2000) and the Haimo Award for Distinguished College or University Teaching of Mathematics of the Mathematical Association of America (2002). He was a member of the inaugural class of Fellows of the AMS in 2012. The official announcement of the award to Sally, including the selection committee’s citation, is published in the May 2014 issue of the NOTICES OF THE AMS, available available web site at http://www.ams.org/notices.