7-Nov-2017 11:05 AM EST, by Perelman School of Medicine at the University of Pennsylvania contact patient services
favorite_border 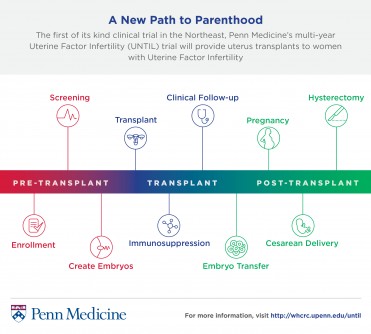 Newswise — PHILADELPHIA – Penn Medicine will conduct the Northeast’s first clinical trial of uterine transplants, to provide women with Uterine Factor Infertility (UFI) - an irreversible form of female infertility that affects as many as 5 percent of women worldwide and 50,000 women in the United States - with a new path to parenthood. A woman with UFI cannot carry a pregnancy either because she was born without a uterus, has had the organ surgically removed, or has a uterus that does not function properly. The Uterine Transplantation for Uterine Factor Infertility (UNTIL) trial is the third of its kind in the United States.

To date, more than 30 uterine transplants have been completed across the world including in Brazil, China, the Czech Republic, Germany, Sweden, India, Saudi Arabia, Turkey, and at two clinics in the United States. Though the procedure is still experimental, a team in Sweden who completed the world’s first uterine transplant has successfully delivered eight babies from women who received a uterus from a friend or family member.

“While there are still many unknowns about uterine transplantation, we know this approach has the potential to give women with UFI a real opportunity to carry and deliver a child,” said Kate O’Neill, MD, MTR, an assistant professor of Obstetrics and Gynecology in the Perelman School of Medicine at the University of Pennsylvania, and co-principal investigator on the UNTIL trial. “The strength of Penn’s research program and exceptional quality of care, particularly in transplant and women’s health, makes us uniquely positioned to be a leading clinical research program for uterine transplants in the United States, and to continue to advance this emerging field.”

Uterine transplantation is a complex procedure that involves both surgical and medical components. Following an extensive evaluation, participants in the UNTIL trial will be followed for several years by a multidisciplinary team of specialists with expertise in transplant, obstetrics & gynecology, clinical trials, bioethics, nursing, social work, psychology, pathology, and infectious diseases. More than 35 providers will be involved in each participant’s care over the course of a five- to 10-year period.

Participants in the trial will move through three phases:

“In most cases, the absence of a uterus also means these women likely do not have a ‘normal’ vaginal canal, making it risky, or impossible, for them to have a vaginal delivery. However, our team of experts is taking every precaution to ensure the health and safety of both our mothers and babies,” said Eileen Wang, MD, an associate professor of Obstetrics and Gynecology and Maternal Fetal Medicine, and co-principal investigator on the UNTIL trial. “Though there isn’t enough research on uterine transplants in particular, we have data and experience caring for mothers with other organ transplants, including kidney and heart, often with good outcomes for mothers with healthy children under careful surveillance. With appropriate management and medication, we do not see increased congenital abnormalities in these fetuses.”

Once a recipient has delivered up to two healthy babies, the transplanted uterus will be removed via hysterectomy, allowing the participant to discontinue use of anti-rejection medications.

The UNTIL trial plans to transplant organs from deceased donors between the ages of 21 and 40, who have successfully delivered healthy children.

“We have engaged our local organ procurement organization (OPO), the Gift of Life Donor Program (GLDP), to begin collaborating on this innovative project,” said Paige Porrett, MD, PhD, an assistant professor of Transplant Surgery, and co-principal investigator on the UNTIL trial. “We look forward to building on the strength of our established partnership with GLDP to provide donor families an additional opportunity to improve others’ lives through transplantation.”

The UNTIL trial is a joint effort between Penn Medicine’s department of Obstetrics & Gynecology and the Penn Transplant Institute. The procedure is part of the highly specialized vascularized composite allotransplantation (VCA) field, which in recent years has allowed for the development of advanced procedures that require the transplantation of multiple tissues such as muscle, bone, nerve, and skin, as a functional unit, such as hands and the face. In addition to the standard research study oversight, this study will be conducted in accordance with transplant center and OPO regulatory requirements, including highly specific authorization and screening requirements governing VCA transplantation and donation.

During the past year, the Penn team has been practicing the surgical procedure in Penn’s Human Tissue Lab in an effort to hone their skills, perfect the surgical technique, and develop detailed plans for coordination across the entire team. Transplant rehearsals will continue in the coming months as the team prepares for the first trial participants.

“The results of the VCA surgeries performed here at Penn have been very promising, and give us the foundation necessary to continue moving ahead with advancements in the field,” Porrett said. “Leadership from OB-GYN and transplant have been incredibly supportive of our mission to help more women and their families realize their dreams of becoming pregnant, carrying healthy babies, and becoming parents.”

Editor’s Note: To read more about uterine transplantation, and advancements in transplantation and VCA at Penn Medicine and across the world, visit https://www.pennmedicine.org/news/news-blog/2017/november/a-new-take-on-the-gift-of-life.