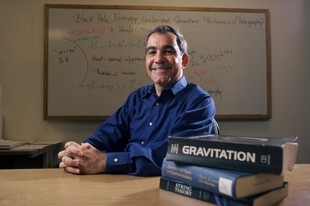 Carlos Ordonez, an associate professor of physics at UH, was awarded the American Physical Society's 2009 John Wheatley Award, which recognizes physicists who have contributed to the development of science in Third-World countries.

Newswise — A University of Houston professor takes the phrase "pay it forward" to heart in his quest to advance science in Third-World countries.

Once a budding physicist seeking opportunities 30 years ago in his native Panama, Carlos OrdÃ³Ã±ez, an associate professor of physics at UH, recruits up-and-coming scientists from Mexico, Peru, Cuba, Brazil and other countries, matching them with UH's top researchers in biology, chemistry and physics for post-doctoral fellowships. During these two-year fellowships, the Latin American students gain valuable experience working with prominent faculty and using state-of-the-art facilities often not available in their home countries.

"Third-World countries are making great efforts to get up to speed on science and technology, and cultivating these collaborative links enhances the human infrastructure in those countries," OrdÃ³Ã±ez said. "Most of these UH fellows return home after the program, equipped with new contacts and colleagues to help strengthen scientific partnerships between the United States and Latin America."

OrdÃ³Ã±ez is passionate about building these partnerships because he also was the beneficiary of a life-changing opportunity to come to the United States. He graduated from the University of Panama with honors and excelled at physics, yet he had little exposure to research until he came to the University of Texas for doctoral studies.

"Competing in such a distinguished research program forced a sharp learning curve," OrdÃ³Ã±ez said. "I was used to solving problems I was given, but now I had to come up with my own questions. Being a student is a passive process, but in research you have to be creative and proactive. The realization that I could go beyond simply acquiring knowledge to actually producing it was an eye-opening experience."

While OrdÃ³Ã±ez was an excellent physics student in his homeland, it was the opportunity to study in the United States with world-class researchers that helped launch his accomplished career as a theoretical physicist. He now works to extend those same opportunities to promising young scientists from Latin America.

His efforts earned him the American Physical Society's 2009 John Wheatley Award, which recognizes physicists who have contributed to the development of science in Third-World countries. The selection committee not only noted his extensive contributions to developing physics throughout Latin America, but also his work with World Laboratory to expand exchange and cooperation between the United States and Latin American.

Founded in Geneva, Switzerland, in 1986, World Laboratory is an international organization that promotes science in developing countries, operating on the premise that one of the driving forces behind social progress in a society is scientific discovery. With more than four times as many people living in developing countries as compared to industrialized nations, scientists such as OrdÃ³Ã±ez and his World Laboratory colleagues seek to eliminate this gap that separates the two. One way to accomplish this is by giving promising new scientists in Third-World countries the means to confront and resolve their problems through such methods as giving them access to learn in some of the world's most prestigious laboratories. They can then bring what they learn back to their homelands to help them with innovative scientific and technological projects in their own countries.

OrdÃ³Ã±ez' research at UH centers on high-energy theoretical physics, and his work in theoretical nuclear physics is widely cited. He and his collaborators also are engaged in researching quantum field theory, with applications in nuclear, condensed and high-energy physics. His current interests include investigating how our universe works through researching the thermodynamics of black holes, as well as string physics.

"Recently, I started investigating how to apply some of the tools learned in studying these cutting-edge topics in gravity and particle physics to the understanding of cold atoms and molecules and other condensed matter systems," OrdÃ³Ã±ez said. "This is a very exciting and recent development to which I hope to make a contribution."

OrdÃ³Ã±ez formally will be presented with the 2009 John Wheatley Award at the next general meeting of the American Physical Society in Denver, Colo., where he will give a talk " "Building bridges instead of fences: Renewed science cooperation with Latin America." " at 10:45 a.m. Saturday, May 2 at the Sheraton Denver Hotel during the conference's "Physics in Latin America" session. The award is given biennially and includes a $2,000 stipend.

NOTE TO JOURNALISTS: A photo of Carlos OrdÃ³Ã±ez is available on the Web at http://www.uh.edu/news-events/news-photos/022709carlos_ordonez. A high-resolution photo is available by contacting Lisa Merkl.

For more information about UH, visit the university's Newsroom at http://www.uh.edu/news-events/.