PCOS Tricky to Diagnose in Adolescents 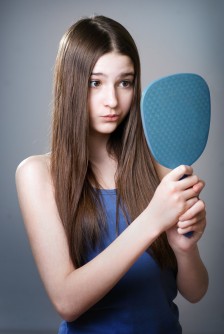 Newswise — A very common cause of infertility in women is a condition called polycystic ovary syndrome (PCOS). Women are usually diagnosed with PCOS in their 20s or 30s after difficulties with getting pregnant, but the condition affects 1 in 10 women of childbearing age (15 to 44) and is linked to health problems other than infertility.

A very common cause of infertility in women is a condition called polycystic ovary syndrome (PCOS). Women are usually diagnosed with PCOS in their 20s or 30s after difficulties with getting pregnant, but the condition affects 1 in 10 women of childbearing age (15 to 44) and is linked to health problems other than infertility.

The problem with recognizing PCOS in adolescents, however, is that its symptoms overlap with characteristics of normal puberty, says Dr. Melissa Pagan Pares, a pediatric endocrinologist at Sinai Hospital.

A lot of women with PCOS miss their periods, skip ovulation, have fewer periods, or have periods more often. But Pagan Pares says irregular menstrual cycles are common in adolescents in general, and thus a correlation with PCOS often isn’t apparent.

In addition, Pagan Pares says, symptoms of hyperandrogenism (unusually high androgen levels) are less reliable diagnostic criteria for PCOS in adolescents than in older women. She says hirsutism (abnormal hair growth, particularly on parts of the body where men usually have hair) “is in a developmental phase” and acne “is very common” in adolescents.

Diagnostic criteria for PCOS in adolescents, Pagan Pares says, should include both clinical and biochemical excess androgens as well as evidence of abnormal uterine bleeding patterns (such as bleeding or spotting between periods or heavy bleeding during periods). Currently, she says, the “gold-standard therapy” for PCOS in adolescents is hormonal contraceptives (a combination of estrogen and progestin) and healthy lifestyle changes including a calorie-restricted diet and exercise.

The exact cause of PCOS is not known, and there is no one specific test used to diagnose the condition. Doctors usually evaluate the patient’s full medical history and current state of health, looking for symptoms typically associated with PCOS. Although a pelvic sonogram is used to examine the ovaries and endometrium in adult women, Pagan Pares says there are no compelling criteria showing it is appropriate for checking for PCOS in adolescents.

“Insulin resistance and hyperinsulinemia are intrinsic to PCOS in adults and adolescents, whether they’re lean or obese. Hyperinsulinemia is believed to exacerbate hyperandrogenism and the reproductive and metabolic manifestations of PCOS in adolescents, meaning that excess insulin and insulin resistance can eventually lead to PCOS,” says Pagan Pares. “But PCOS will manifest in itself when there is a genetic susceptibility for the syndrome, and when hyperandrogenism is present. Yes, obesity, hyperinsulinemia and insulin resistance can be precursors of PCOS, but that doesn’t mean that PCOS will manifest in all patients with these conditions.”

PCOS is among the conditions treated by the pediatric endocrinology division at Sinai Hospital. To schedule an appointment with one of LifeBridge Health’s highly trained physicians, fill out our online appointment request form, or call 410-601-WELL. We provide preventive and consultative care services for a wide range of gynecological conditions, including the most advanced screening and treatment procedures available.