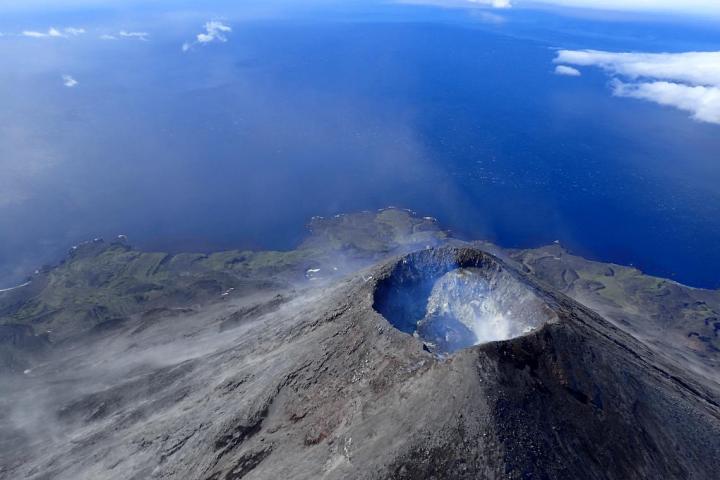 The summit of Cleveland volcano in Alaska's central Aleutian Islands. A lava dome is visible in the crater. 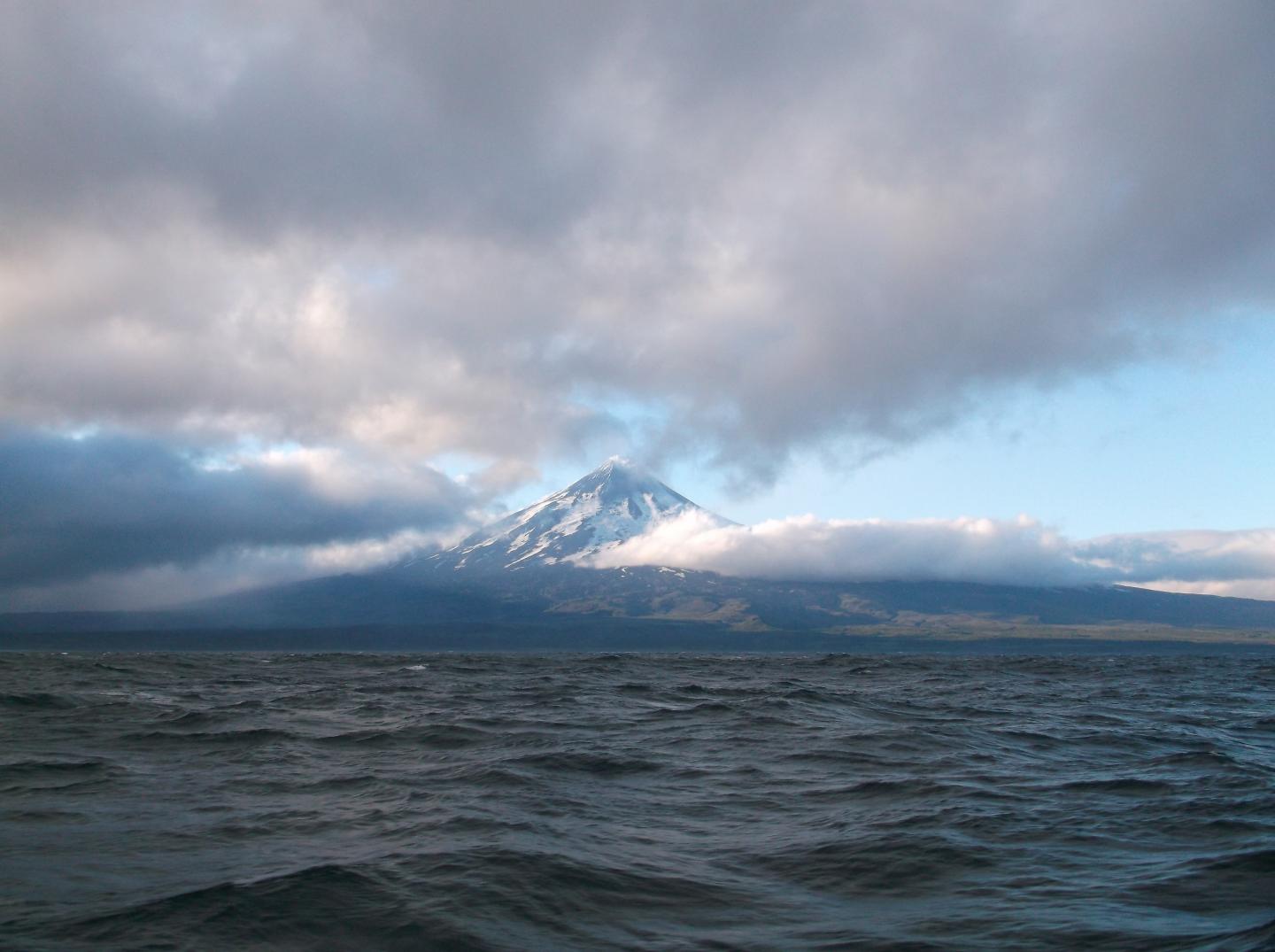 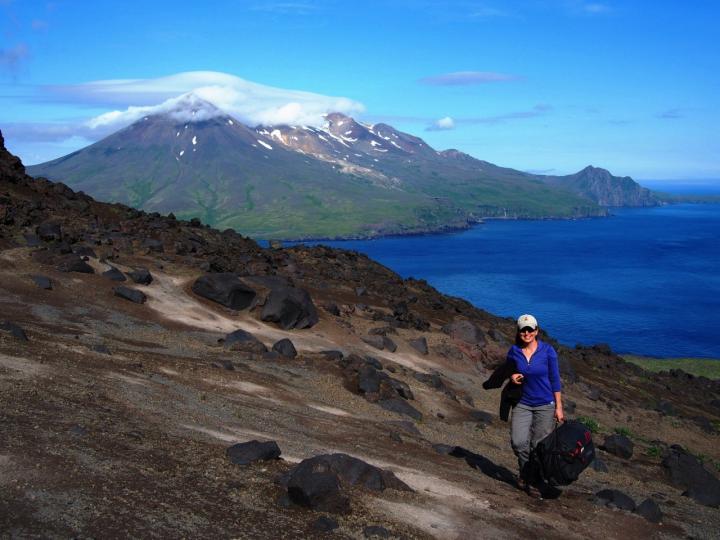 Carnegie's Diana Roman collecting samples from Alaska's Cleveland volcano, one of the most-active volcanoes in the Aleutians. Tana Volcano on Chuginadak Island isn in the background.

Washington, DC-- A new approach to analyzing seismic data reveals deep vertical zones of low seismic velocity in the plumbing system underlying Alaska's Cleveland volcano, one of the most-active of the more than 70 Aleutian volcanoes. The findings are published in Scientific Reports by Helen Janiszewski, recently of Carnegie, now at the University of Hawai?i at Mānoa, and Carnegie's Lara Wagner and Diana Roman.

Arc volcanoes like Cleveland form over plate boundaries where one tectonic plate slides beneath another. They are linked to the Earth's mantle by complex subsurface structures that cross the full thickness of the planet's crust. These structures are more complex than the large chambers of molten rock that resemble a textbook illustration of a volcano. Rather, they comprise an interlaced array of solid rock and a "mushy" mix of partially molten rock and solid crystals.

Resolving this subterranean architecture is crucial for emergency planning and saving human lives. But these regions have been difficult to image.

Since it's impossible for humans to directly observe the depths of our planet's interior, scientists need instruments to help them visualize what's happening down there. Traditionally, a variety of geophysical and geochemical approaches are deployed to determine the structures that exist beneath a volcano.

For example, the seismic waves caused by earthquakes can be used like an ultrasound to map the Earth's interior. But for this to work, the waves must reach the subterranean structures that the scientists want to study. Although Cleveland has frequent gas emissions, explosions, and ash deposits at its surface, there is very little evidence of seismic activity deep beneath the volcano. This makes imaging the architecture of the lower and middle crust below Cleveland very challenging.

Until now, the number of instruments needed to use seismic waves traveling from more-distant earthquakes for imaging was prohibitive.

In this work, Janiszewski demonstrated a novel technique that uses seismic waves coming from distant earthquakes but isolates just the part of them that is affected by moving through the boundary between the Earth's mantle and crust. This allowed Janiszewski to build models that better distinguish the partially molten regions from the surrounding solid rock in these difficult-to-reach depths beneath Cleveland volcano without requiring a much-more-extensive number of seismic stations at the surface.

"We revealed the volcano's deep subterranean structure in never-before-seen detail, using fewer instruments by an order of magnitude than is typical for detailed seismic imaging at volcanoes," Janiszewski said.

Unlike typical seismic imaging experiments that deploy dozens of seismometers, this study used only eight. Six of these stations were deployed as part of the NSF-funded Islands of the Four Mountains experiment between August 2015 and July 2016. Two were permanent Alaska Volcano Observatory stations.

"The technique will allow imaging of structures underneath volcanoes where there are only a few stations, or where a lack of deep earthquakes in the vicinity makes other methods difficult," Janiszewski added.

Caption: The summit of Cleveland volcano in Alaska's central Aleutian Islands. A lava dome is visible in the crater.

Caption: Carnegie's Diana Roman collecting samples from Alaska's Cleveland volcano, one of the most-active volcanoes in the Aleutians. Tana Volcano on Chuginadak Island isn in the background.