20-Jun-2017 10:05 AM EDT, by Perelman School of Medicine at the University of Pennsylvania contact patient services
favorite_border 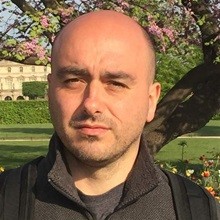 Newswise — PHILADELPHIA— Jorge Henao-Mejia, MD, PhD, an assistant professor of Pathology and Laboratory Medicine in the Perelman School of Medicine at the University of Pennsylvania and Children’s Hospital of Philadelphia, has been recognized by The Pew Charitable Trusts as one of its 22 national Pew Scholars in Biomedical Sciences. The 2017 class of Pew Scholars is made up of outstanding early-career scientists from prominent academic and research institutions throughout the United States.

The award of $240,000 over four years helps recipients to pursue foundational, innovative research.

“I am deeply honored to be selected as a 2017 Pew Scholar in Biomedical Sciences,” said Henao-Mejia. “It is both gratifying and humbling to become part of the truly outstanding group of Pew Scholars.”

The goal of the Henao-Mejia lab is to use gene editing tools, including the CRISPR/Cas9 system, to establish the molecular mechanisms involved in the development of chronic inflammatory conditions. Chronic inflammation is a key component of such common disorders as obesity, atherosclerosis, inflammatory bowel disease, and cancer. Understanding its cause is critical for developing new treatments.

In a paper last year in Nature, Henao-Mejia led a team of researchers who found that special RNA molecules called long non-coding RNAs are vital for maintaining immune health.

In the Nature study, Henao-Mejia and his colleagues found that Morrbid controls the life span of myeloid (relating to bone marrow) cells, which are key to maintaining the right balance between battling infection and causing inflammation. These cell types, which make up 70 percent of all circulating white blood cells, are extremely powerful in their reaction against invaders, potentially causing serious damage to nearby, healthy tissue. The discovery offers a potential drug target for several inflammatory disorders.

“Pew is proud to support these investigators as they use novel approaches to illuminate the mechanisms of human biology and disease,” said Rebecca W. Rimel, president and CEO of The Pew Charitable Trusts. “This impressive group has demonstrated the curiosity and courage that drive great scientific advances, and we are excited to help them fulfill their potential.”

Henao-Mejia received his MD from the University of Antioquia, Colombia in 2005 and his PhD in microbiology and immunology from Indiana University in 2009. He was a fellow of the Howard Hughes Medical Institute at Yale University; and a postdoctoral fellow in immunology at Yale in Dr. Richard Flavell’s laboratory.

The rigorously competitive Pew Scholars program, launched in 1985, has granted funding support to more than 900 biomedical scientists at the beginning of their independent careers. This year’s scholars were chosen from nominations from approximately 180 leading academic and research institutions nationwide.