24-May-2017 3:05 PM EDT, by Perelman School of Medicine at the University of Pennsylvania contact patient services
favorite_border 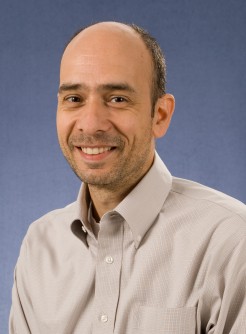 Newswise — PHILADELPHIA – Ronen Marmorstein, PhD, a professor of Biochemistry and Biophysics in the Perelman School of Medicine at the University of Pennsylvania, is one of five investigators who received a grant from the Arnold and Mabel Beckman Foundation for the creation of a state-of-the-art cryogenic electron microscopy (cryo-EM) facility. The investment supports research in chemistry and the life sciences and will also go towards maintaining the cryo-EM facilities and hiring of new faculty skilled in its uses.

“This is high-end instrumentation that can be used to determine the atomic structure of complex protein units as they exist in their natural cellular environment,” Marmorstein said. “The technology lets us basically deep freeze biological samples while at the same time irradiating them with high-intensity electrons to image the three-dimensional shape in atomic detail.”

The field of structural biology has been transformed with the development of cryo-EM to determine atomic structures that are currently beyond the reach of more traditional techniques such as X-ray crystallography and nuclear magnetic resonance, which have significant limitations on sample preparation requirements.

“The new cryo-EM capabilities will enable fundamental advances in our understanding of biological processes and will also contribute to the structure-based development of new therapeutics,” Marmorstein said. Developing potent new compounds often involves structure-based tweaking to optimize the molecule destined to be a drug. In cases where such compounds bind to much larger complexes made of many proteins, cryo-EM may be the only way to accurately view the binding sites to develop drugs.

“While the expense can make acquiring this technology via federal grants prohibitive, we as a private foundation are in a unique position to support major infrastructure investments to enable broader use of this new tool and increase access for young scientists to this exciting field of study,” said Anne Hultgren, executive director of the Beckman Foundation.