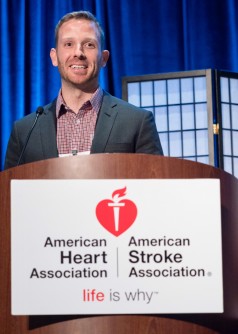 Newswise — PHILADELPHIA— Benjamin L. Prosser, PhD, an assistant professor of Physiology, in the Perelman School of Medicine at the University of Pennsylvania, has received the Outstanding Early Career Investigator Award from the American Heart Association’s (AHA) Council on Basic Cardiovascular Sciences, one of its scientific divisions.

Prosser’s award was based on his research to date and the “originality, quality and impact” of an oral abstract he presented at the Council’s 2017 Basic Cardiovascular Sciences (BCVS) meeting, held earlier this month in Portland, Oregon. The presentation focused on the Prosser lab discovery that clinicians and researchers, working together, might improve the beating strength of heart cells from patients with heart failure by "softening" the internal cytoskeleton (the network of protein filaments and microtubules) of those cells.

Last year, in a paper published in Science, Prosser and his colleagues described advanced imaging techniques to explore microtubule behavior in beating heart-muscle cells from rodents. They discovered that healthy microtubules — long believed to be stiff — instead “buckle” with each contraction and then return to their original configuration. This process provides mechanical resistance for the beating of the heart, enabling the microtubules to serve as what Francis S. Collins, MD, PhD, director of the National Institutes of Health, called “molecular shock absorbers” in a blog about the findings. But, Prosser and his colleagues found that manipulating heart cells to increase microtubule stiffness impeded contraction, impairing cardiac function. A tentative conclusion is that microtubules provide sufficient, but not excessive resistance in healthy heart muscle.

The visual evidence produced by the Prosser team was a major advance, since it is technically difficult to see parts of heart muscle in operation in real time. Together, the findings and visual documentation have potentially powerful implications for better understanding how microtubules affect the mechanics of the beating heart and what happens when the process goes wrong. Prosser is now examining whether specific drugs can make diseased heart cells isolated from patients with heart failure beat stronger by enabling the microtubules to slide back and forth more smoothly. This would allow the heart to pump blood more efficiently with each contraction. Promising early studies from patient cells were presented at this year’s BCVS meeting.

Prosser received his BS degree in health and exercise science from Wake Forest University and his PhD in molecular medicine from the University of Maryland School of Medicine.