3-Jan-2018 10:05 AM EST, by Perelman School of Medicine at the University of Pennsylvania contact patient services
favorite_border 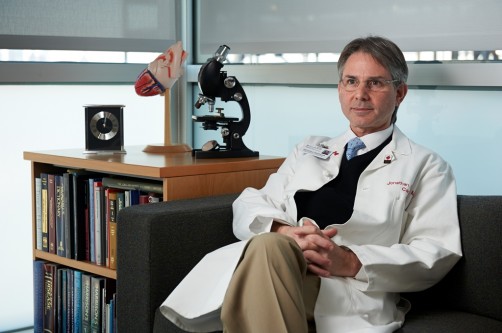 Newswise — PHILADELPHIA—Jonathan A. Epstein, MD, executive vice dean and chief scientific officer of Penn Medicine, has received a National Heart, Lung, and Blood Institute (NHLBI) Outstanding Investigator Award. The highly competitive award provides long-term support to “an experienced investigator with an outstanding record of research productivity.” In issuing the award, the NHLBI, which is part of the National Institutes of Health, described Epstein as “an outstanding, pioneering investigator” and “a gold standard role model for physician-scientists in the field.”

Epstein, who is also the William Wikoff Smith Professor of Cardiovascular Research in the Perelman School of Medicine at the University of Pennsylvania, studies molecular mechanisms of cardiovascular development and stem cell biology, and their implications for understanding human disease.

The award will provide $6.7 million over seven years to investigate lineage determination and cell fate, a field of research that aims to understand how a single fertilized egg is transformed into the numerous specialized tissues that comprise the body. Specifically, using super-resolution imaging and CRISPR-related techniques, Epstein will visualize and examine gene locations in live cells, concentrating on understanding how the process that produces cardiac cells can be manipulated to potentially regenerate damaged cardiac tissue following heart attacks and other cardiac diseases. In granting its award, the NHLBI noted that this area of research has “broad importance in multiple cell types beyond cardiac cells,” including the brain and intestines.

A board-certified cardiologist, Epstein joined the Penn faculty in 1996. A graduate of Harvard College and Harvard Medical School, he completed his residency and fellowship in medicine and cardiology at the Brigham and Women’s Hospital, where he also completed a Howard Hughes Medical Institute postdoctoral fellowship in genetics. He and his laboratory colleagues have identified causes of and potential new therapies for congenital heart disease and adult heart failure, as well as uncovered basic signaling mechanisms that regulate stem-cell differentiation and quiescence (periods when a cell is not dividing). This work provides important clues for efforts to regenerate damaged organs, including the heart. Epstein is the author of more than 190 peer-reviewed articles in numerous journals, including Nature, Science, the New England Journal of Medicine, and Cell, as well as Harrison’s Principles of Internal Medicine, the leading textbook in the field.

Epstein is a member of the American Academy of Arts and Sciences, American Association of Physicians, past president of the Interurban Clinical Club and the American Society for Clinical Investigation, and a member of the National Academy of Medicine. He serves on several editorial boards and is a past deputy editor of the Journal of Clinical Investigation. He is a member of the NIH Council of Councils and the NIH Precision Medicine Initiative Cohort (“All of Us”) Program Advisory Committee. Epstein was a founding co-director of the Penn Institute for Regenerative Medicine in 2007.