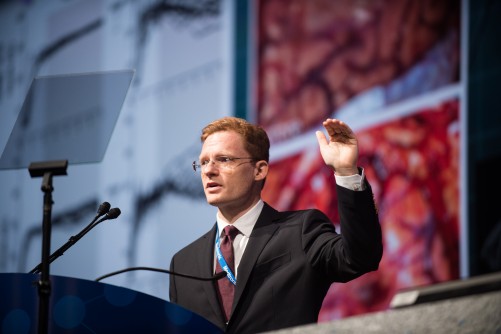 This is Timothy H. Lucas, II, MD, PhD, an assistant professor of Neurosurgery and director of the Translational Neuromodulation Lab in the Perelman School of Medicine at the University of Pennsylvania.

Newswise — PHILADELPHIA – Timothy H. Lucas, II, MD, PhD, an assistant professor of Neurosurgery and director of the Translational Neuromodulation Lab in the Perelman School of Medicine at the University of Pennsylvania, has been awarded the 2017 Fellow in Leadership Award by Alpha Omega Alpha national medical honor society. This annual fellowship is awarded to three mid-career physicians nationwide who exhibit outstanding leadership in their institutions. Alpha Omega Alpha provides one year of funding to winners as they explore creative, sustainable, and ethical modes of leadership. Penn Medicine will also match Lucas’ funding award.

“Leadership in an academic medical center requires development of skills outside of research and clinical excellence,” noted Sean Grady, MD, the Charles Harrison Frazier Professor of professor and chair of Neurosurgery. “Through the structure of the AOA fellowship, Dr. Lucas will have the opportunity to hone those skills – similar to what occurs in the best businesses today as exceptional individuals are identified for future leadership opportunities.”

During the one year fellowship, Lucas plans to divide his focus on interconnected topics, including examining the leadership styles of Penn Medicine executives, pursuing a master’s degree in the University of Pennsylvania’s inaugural Master of Health Care Innovation program, and exploring the business models of leading academic medical centers and health systems.

Addressing these topics marks a departure from Lucas’ typical research lab work on implantable devices that can restore body-brain communication following spinal cord injuries. However, the funding shortages academic physicians are facing motivated him to submit a proposal.

“I am honored to represent the University of Pennsylvania for this award,” Lucas said. “I look forward to working with our team of national thought leaders as we develop innovative business models for the future of healthcare.”

According to Lucas, the relationship between academic medical centers and health care corporations in the United States is both longstanding and symbiotic in nature, but it is also facing major challenges. Clinical revenues are strained as insurance reimbursements fall, funding for grants from the National Institutes of Health are becoming more competitive, and academic positions are being depleted. Ultimately, Lucas hopes to identify innovative business models that can provide a viable financial future for academic medical centers and hospitals alike.

“As the incoming president of Alpha Omega Alpha and chair of its Fellows in Leadership Committee, I can attest to the importance of this program – not only for its recipients, but for the future of healthcare in the United States,” said Eve Higginbotham SM, MD, vice dean for Inclusion and Diversity, senior fellow of the Leonard Davis Institute, and professor of Ophthalmology. “This award recognizes excellence in service leadership, and Dr. Lucas exemplifies those ideals. His project holds great promise in ensuring the future of academic medicine in an era focused on business metrics rather than research and education.”