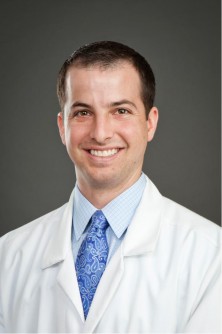 David Goldberg, MD, MSCE, gastroenterologist and instructor of Medicine, Perelman School of Medicine at the University of Pennsylvania.

Newswise — (PHILADELPHIA) – Research derived from early national experience of liver transplantation has shown that deceased donor liver transplants offered recipients better survival rates than living donor liver transplants, making them the preferred method of transplantation for most physicians. Now, the first data-driven study in over a decade disputes this notion. Penn Medicine researchers found that living donor transplant outcomes are superior to those found with deceased donors with appropriate donor selection and when surgeries are performed at an experienced center. The research is published this week in the journal Hepatology.

Lead author David Goldberg, MD, MSCE, and colleagues in the Perelman School of Medicine at the University of Pennsylvania examined national transplant data from Organ Procurement and Transplant Network (OPTN)/United Network for Organ Sharing (UNOS) between 2002 to 2012 to compare outcomes in deceased donor transplants with those of living donor liver transplant recipients.

“With a scarcity of organs and an ever growing need, living donor transplants are underused and can alleviate long transplant wait lists while decreasing waiting list mortality, with outcomes that can be as good, and when performed at an experienced center, potentially better for living donor recipients,” says Goldberg. “Every year 20 to 30 percent of patients die waiting for a new liver.”

The team found that those patients with cases complicated by autoimmune hepatitis or cholestatic liver disease had the greatest survival benefit compared with deceased donors when they received a living donor transplant performed at an experienced center.

Further, the Penn researchers developed a novel scoring system for living donor transplant recipients that considers several donor and recipient variables to help predict post-transplant outcomes. This score, which requires further validation, can rank recipients in high, intermediate and low-risk groups. They believe risk stratification can help identify optimal donor and recipient matches which can lead to better outcomes and can be used to counsel waitlisted patients considering living donor transplantation. It can also provide objective criteria for donor selection.

Using this, the team found that three-year survival rates for the best matched/lowest risk donor and recipient pairs could be greater than 87 percent and less than 74 percent for the worst-matched/highest-risk group.

# # #Penn Medicine is one of the world's leading academic medical centers, dedicated to the related missions of medical education, biomedical research, and excellence in patient care. Penn Medicine consists of the Raymond and Ruth Perelman School of Medicine at the University of Pennsylvania (founded in 1765 as the nation's first medical school) and the University of Pennsylvania Health System, which together form a $4.3 billion enterprise.The Perelman School of Medicine has been ranked among the top five medical schools in the United States for the past 17 years, according to U.S. News & World Report's survey of research-oriented medical schools. The School is consistently among the nation's top recipients of funding from the National Institutes of Health, with $392 million awarded in the 2013 fiscal year.The University of Pennsylvania Health System's patient care facilities include: The Hospital of the University of Pennsylvania -- recognized as one of the nation's top "Honor Roll" hospitals by U.S. News & World Report; Penn Presbyterian Medical Center; Chester County Hospital; Penn Wissahickon Hospice; and Pennsylvania Hospital -- the nation's first hospital, founded in 1751. Additional affiliated inpatient care facilities and services throughout the Philadelphia region include Chestnut Hill Hospital and Good Shepherd Penn Partners, a partnership between Good Shepherd Rehabilitation Network and Penn Medicine.Penn Medicine is committed to improving lives and health through a variety of community-based programs and activities. In fiscal year 2013, Penn Medicine provided $814 million to benefit our community.