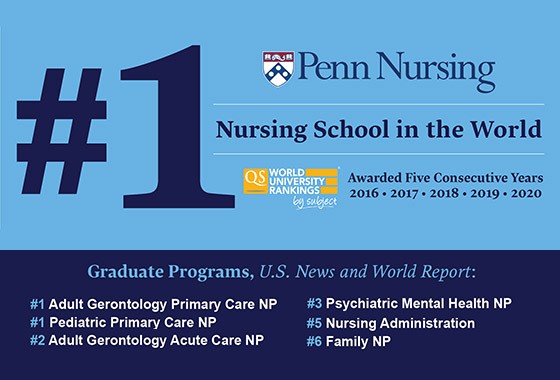 Newswise — The University of Pennsylvania School of Nursing (Penn Nursing) continues its streak of being the number one nursing school in the world according to a recent ranking by QS World University. The rankings highlight the world’s top universities in 48 different subject areas based on academic reputation, employer reputation, and research impact. This is the fifth consecutive year that Penn Nursing has taken the top spot.

“We are thrilled that Penn Nursing is the number one school of nursing in the world for five consecutive years,” said Penn Nursing Dean Antonia Villarruel. “And, as I’ve said before, while we’re proud of this multi-year achievement, we’re continuing to focus on being number one for the world. Our internationally-recognized faculty, exceptional students, and supportive staff are dedicated to advancing learning and practice, fostering and promoting collaboration and innovation, and delivering cutting-edge research that impacts people’s lives in communities around the world, every day.”

The QS World University Rankings by Subject aim to help prospective students identify the world’s leading schools in their chosen field in response to high demand for subject-level comparisons. Each of the subject rankings is compiled using four sources. The first two of these are QS’s global surveys of academics and employers, which are used to assess institutions’ international reputation in each subject. The second two indicators assess research impact, based on research citations per paper and h-index in the relevant subject. These are sourced from Elsevier’s Scopus database, the world’s most comprehensive research citations database. These four components are combined to produce the results for each of the subject rankings, with weightings adapted for each discipline.