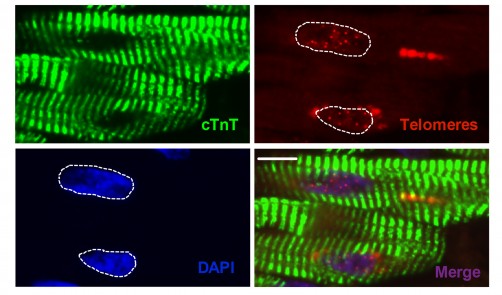 Newswise — PHILADELPHIA— Each cell in the average human body contains 23 pairs of chromosomes, with four telomeres on each pair. Telomeres cover the end of the chromosome, protecting it from deterioration or fusion with adjacent chromosomes, much like the plastic tip at the end of a shoelace protects it from unraveling. While there is a length range for classifying a healthy telomere, researchers found, for the first time ever, that people with heart failure have shorter telomeres within the cells that make up the heart muscle (known as cardiomyocytes).

A team of researchers from Penn Medicine, in collaboration with the University of Connecticut, published their findings today in the Journal of the American Heart Association, building on a methods paper which was published recently in Nature Protocols. The team is the first to have developed a method for measuring the length of telomeres using human heart tissues.

“Once we had established the method for measuring the telomeres in heart cells, which was tricky because human cardiac cells are rarely taken from a living person, we acquired heart tissue samples from patients receiving heart transplants and organ donors in order to evaluate telomere length,” said the study’s lead researcher, Foteini Mourkioti, PhD, an assistant professor of Orthopaedic Surgery and Cell and Developmental Biology, and co-director of the Musculoskeletal Regeneration Program in the Penn Institute for Regenerative Medicine. “Using samples from the Penn Heart Tissue Biobank meant we were also able to acquire patient data for the samples, so we knew useful information like the patient’s age, sex, and heart function.”

Researchers were able to measure the telomeres in the samples of patients who had heart disease and those who did not, and group the findings into categories based on patients’ age. They found that in the samples for healthy people, age did not play a role in telomere length, since the telomeres of both young and old healthy individuals were not affected. However, patients with heart failure had shorter telomeres regardless of their age. In comparing diseased and healthy samples, researchers were able to draw a correlation between shorter telomeres and the presence of heart failure. Patients with the shortest telomeres in their cardiac cells also had the most severely decreased cardiac function. The team also found that the cardiomyocytes were the only heart cells affected by the telomere length in disease samples, but the telomere length of other cells within the same diseased heart samples were not different.

“This human tissue research is critical as it may open the door for future telomere preserving therapies to help protect heart failure patients” said co-author Kenneth B. Margulies, MD, a professor of Medicine and research director for Heart Failure and Transplantation. “While there is a need to better understand how heart disease induces telomere shortening, this is an important step in the research process, one that brings us closer to a better understanding of heart failure”

Leaning on this human data to inform basic science studies, Mourkioti and her team are now working to pinpoint pathways that specifically target cardiomyocytes, in order to track the disease progression and identity areas for therapeutic interventions that can later be tested in in-human clinical trials. “The important thing is that we now have a new lead to follow and test how cardiac-specific telomere interventions can improve heart function” Mourkioti said.

Additional Penn authors on the studies mentioned in this release include Maryam Sharifi-Sanjani, Nicholas M. Oyster, Elisia D. Tichy, and Kenneth C. Bedi. These studies were funded by start-up funds and a Pilot and Feasibility Grant from National Institutes of Health (P30 AR069619) and procurement of human heart tissues were enabled by grants from the National Institutes of Health (HL089847 and HL105993).