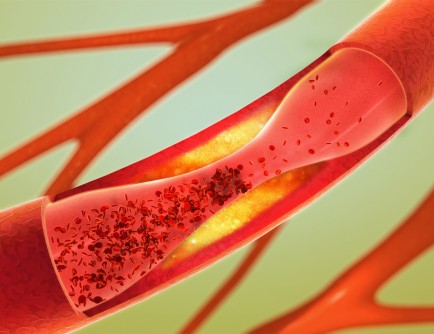 PAD is a narrowing of the arteries from the heart to the legs and other peripheral areas of the body. It's caused by atherosclerosis, a build-up of arterial plaque. More than 8.5 million Americans are estimated to have PAD, which puts them at an increased risk of heart attacks and strokes, as well as complications ranging from problems with wound healing to amputations.

Debilitating pain is a daily struggle for many patients with PAD. They may experience chest pain, as well as pain or cramping in leg or hip muscles, when they walk or climb stairs.

Patients with PAD have higher-than-normal blood pressure increases when they exercise, which raises the risk of chest pain, heart attacks and strokes. Sinoway's team hypothesizes that blood pressure rises so much in PAD patients during physical activity because of an abnormally activated exercise pressor reflex.

"We think that understanding this reflex is really crucial to understanding why people with peripheral arterial disease get these other problems, and to understand how we can improve their disability," he said.

The award from the NIH is a Program Project grant (PO1), which supports broad-based, multidisciplinary research focused on a specific theme. The money will be shared among three projects studying the exercise pressor reflex system in PAD.

Sinoway will investigate the reflex in people with PAD. One of his studies will examine the reflex and blood pressure increases before and after surgical interventions that restore blood flow to the affected limb.

The two other lead researchers on the project will conduct their studies in rodent models of PAD. Marc Kaufman, professor and research associate director of the Heart and Vascular Institute, will study nerve fibers that sense reduced oxygen in leg muscles during exercise in PAD. Dr. Jianhua Li, professor of medicine, will investigate the role of cytokines, small proteins secreted by muscle cells that may play a role in elevating the reflex in PAD. Li first came up with the idea to study the reflex in PAD eight years ago.

Other researchers who will make a major contribution to the project are Victor Ruiz-Velasco, professor of anesthesiology and perioperative medicine, who will provide the animals for the research, and Qing Yang, professor of radiology, bioengineering, engineering sciences and neurosurgery, who will collaborate on MRI studies looking at how effectively the reflex restores blood flow and oxygen delivery to muscle in PAD patients.

The researchers suspect the exercise pressor reflex may not be particularly effective in delivering extra blood and oxygen to muscles in people with PAD. The reflex may work overtime in PAD patients to compensate, leading to dangerously high blood pressure and an overtaxed heart.

Confirming this would open the door to reducing the reflex—by advising different types of physical activity or with drugs—which could reduce pain and fatal events in patients.

"We think the exercise pressor reflex is a big player" in PAD complications, Sinoway said. "But there's very little literature out there on this, and that's why we think it's a significant topic."