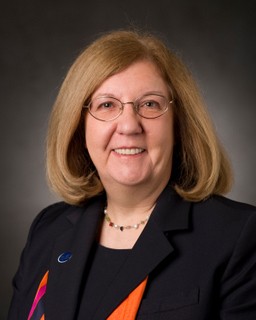 Judith A. Todd, P.B. Breneman department head chair and professor of engineering science and mechanics has been elected to the Board of Trustees of ASM International.

Newswise — UNIVERSITY PARK, Pa. — Judith A. Todd, P.B. Breneman department head chair and professor of engineering science and mechanics, has been elected to the Board of Trustees of ASM International (ASM).

Todd, who has been a member of ASM since 1978, was voted in on Oct. 9 during the ASM Annual Business Meeting held at the 2017 Materials Science & Technology Conference in Pittsburgh. She will serve a three-year term on the Board.

ASM, the world's largest and most established materials information society, is the preeminent association for engaging and connecting materials professionals and their organizations to the resources necessary to solve problems, improve outcomes and advance society.

Todd is an ASM Fellow; a Fellow of the American Society of Mechanical Engineers (ASME), where she served as vice president of the Manufacturing Technology Group from 2002 to 2005; a Fellow of the Association of Women in Science; and she served as president of the Society of Engineering Science from 2008 to 2009. Todd has received numerous awards including the Vanadium Award from the British Institute of Materials, the ASME Board on Minorities and Women Award and the Presidential Award for Excellence in Science, Mathematics and Engineering Mentoring, which she received from President George W. Bush in 2007.

Her research interests include development of advanced materials and manufacturing processes, laser-sustained plasma and laser-materials interactions, mechanical behavior, nondestructive evaluation of materials and archaeometry. She has published more than 100 technical papers and holds two U.S. patents.

Todd received her B.A., M.A. and Ph.D. degrees in materials science from Cambridge University and is a Chartered Engineer (professional engineer) in the United Kingdom.