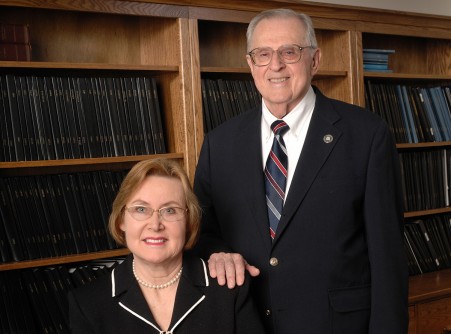 Hal and his wife, Inge, have been among Penn State’s most generous donors and have supported numerous academic and research initiatives over the years. Hal died on March 18 at the age of 89.

Newswise — UNIVERSITY PARK, Pa. – The Penn State community has lost an alumnus whose dedication and support spanned decades within the University and particularly the College of Engineering. Harold “Hal” Marcus, a 1949 Penn State graduate and retired industrial engineer turned real estate entrepreneur, died on March 18 at his home in Olympia, Washington, at the age of 89.

Hal and his wife, Inge, have been among Penn State’s most generous donors and have supported numerous academic and research initiatives over the years.

“I was saddened to hear of the passing of Hal Marcus. Hal and his wife Inge were named Philanthropists of the Year in 2003, one of the University’s highest distinctions, recognizing their exceptional generosity and philanthropic leadership to the College of Engineering and for the Penn State community,” said Penn State’s President Eric Barron. “My condolences go out to Inge, his son Matthew and the rest of the Marcus family. His loyalty and generosity will be remembered and his gifts appreciated for many years to come.”

The Marcuses’ most generous gift came in 2010 in the form of a $10 million endowment to foster interdisciplinary research that span the realms of engineering, science and medicine.

The couple’s other major gifts to the University include: • a $500,000 endowment in 1995 to create the Marcus International Exchange in Industrial Engineering between Penn State and the Technion, the Israeli Institute of Technology;• a $5 million gift in 1998 to the industrial engineering department, subsequently renamed the Harold and Inge Marcus Department of Industrial and Manufacturing Engineering in appreciation of the donors' generosity;• a $5 million endowment in 2003 to establish the Harold and Inge Marcus Dean’s Chair in Engineering; and• a $1 million gift to support the Center for Service Enterprise Engineering in industrial and manufacturing engineering.

The Marcuses were also major contributors to the David and Shirley Wormley Excellence Fund for the Support of World Class Engineers in 2013.

“Hal Marcus was not just a generous Penn State alumnus, he was a driving force for transformational change and empowerment of his home department and the college of engineering,” said Amr Elnashai, Harold and Inge Marcus Dean of Engineering. “His vision continues to inspire the Department of Industrial and Manufacturing Engineering, and his and Inge's College of Engineering endowment has enabled incredible innovation.

“Hal, in partnership with Inge, have positioned successive deans for success, and the creation of pioneering programs that have served, and will continue to serve, tens of faculty and hundreds of students. Indeed, the title 'Harold and Inge Marcus' became synonymous with 'Academic Excellence' at Penn State Engineering.”

The College honored Marcus with its Outstanding Engineering Alumnus Award in 1998.

“We are saddened by Hal's passing and forever grateful to Hal and Inge for their inspiration and generous giving to support our excellence,” said Janis Terpenny, Peter and Angela Dal Pezzo Chair and Head of the Marcus department.”

The Marcuses have been dedicated supporters of Penn State Hillel, the Foundation for Jewish Student Life.

Born on Dec. 15, 1927, Marcus was a Brooklyn native who served in World War II and went on to earn his bachelor’s degree in industrial engineering from Penn State. He spent much of his career working in industrial engineering and management consulting before becoming involved in real estate. He is the former president of Hal Marcus Inc. and American Villages Inc., real estate development and management companies.

In addition to his bachelor’s degree from Penn State, Marcus earned a master’s degree from the University of Southern California. In 2000, he was awarded a doctorate of humane letters by St. Martin's College in Olympia, Washington, where he served in many capacities, including as president of the college's board of trustees. He was presented with University medal at St. Martin’s in 2007 and the university also is home to the Hal and Inge Marcus School of Engineering.

In addition to his wife, Marcus is survived by his son, Matthew, daughter-in-law, Shelley and five grandchildren.

Penn State will hold a Celebration of Life ceremony honoring Marcus at a later date.