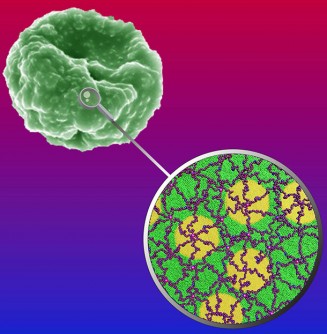 The red blood cell in the top left is infected with the malaria parasite and has developed knobs on its surface. The enlargement shows the cytoskeleton network. 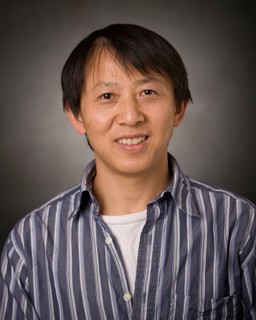 Newswise — UNIVERSITY PARK, Pa. – A multidisciplinary team of researchers has received a $25,000 seed grant from the Penn State Institute for CyberScience (ICS) to develop a modeling platform to predict the deformability and morphological changes of diseased and aged red blood cells (RBC).

Sulin Zhang, professor of engineering science and mechanics at Penn State, is the principal investigator (PI) on the one-year project titled “Understanding the Molecular Origins of Impaired Deformability and Shape in Diseased and Aged Red Blood Cells through Multiscale Modeling.”

During its approximate 120-day lifespan, an RBC circulates through the human body approximately one million times and frequently squeezes through narrow capillaries, demonstrating two distinct features: a discoid shape and a remarkable deformability. However, these two features can be critically compromised by genetic disorders, upon RBC aging and through infection with malaria parasites.

Less deformable RBCs take longer to traverse through microcirculation, resulting in diminished oxygen and nutrient delivery to organs, and they can also become sequestered in the microvasculature, leading to capillary obstruction and organ dysfunction.

“Upon malaria infection or aging, the RBC membrane gets altered,” said Zhang. “For example, malaria will import many different surface proteins that will change its architecture and deformability, changing its architecture by making it larger and more rigid. By focusing on specific microstructure-property relationships, we hope to understand what causes these alterations and how to prevent them.”

In developing their multiscale model, the researchers will build a detailed blueprint of all molecular structures within entire RBCs using advanced high-resolution 3D imaging techniques created by Tilley’s group, including young and aged, healthy and diseased RBCs. The simulation results will then be validated by microfluidic experiments, where a microfluidic channel functions as a sensor that converts the RBC-channel interaction characteristics to electrical signals. A comparison of the signal strength and transit time of normal and diseased RBCs when passing through the microfluidic channels will determine the disease state of the cells.

The seed grant will foster international collaboration and support one graduate student on the project. Zhang will also identify one senior undergraduate student to help perform data analysis.

The ICS is one of the five interdisciplinary research institutes under the Office of the Vice President for Research, and is dedicated to supporting cyber-enabled research across the disciplines. ICS builds an active community of researchers using computational methods in a wide range of fields through co-hiring of tenure-track faculty, providing seed funding for ambitious computational research projects and offering access to high-performance computing resources through its Advanced CyberInfrastructure.

Of the 33 proposals submitted to the ICS this year, 20 were selected for funding. This represents a major increase over the 2016 ICS Seed Grant Program, where six projects were funded. More on the 2017-funded projects can be found here.