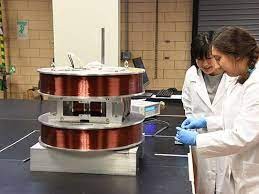 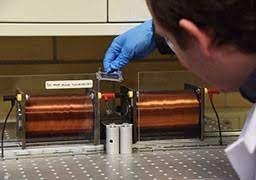 “Aerospace and automotive structures often contain heavy metals that can negatively affect performance and efficiency of vehicles,” said Yamamoto. “If we can replace some of those metals with novel materials containing CNTs, which are lighter in weight, yet stronger and can conduct electricity and heat better, we can improve vehicle performance, increase safety, increase energy efficiency and reduce maintenance.”

Yamamoto’s project, titled “3D magnetic structuring and hierarchical integration of multifunctional polymer nanocomposites,” aims to fully harness the potential of controlled nanotube structuring by developing a scalable method that will enable 3D structuring of two types of CNT-PNCs, with different structures and aimed property enhancement, using oscillating magnetic fields. In addition, Yamamoto will study the effects that CNT structures and their interactions have on macroscale properties of the hierarchal composites.

For approximately the past 20 years, CNT implementation has been investigated for reinforcing carbon fiber reinforced plastics, the major material component of aerospace structures; however, while CNTs alone exhibit advanced properties when tested at the nanoscale and microscale, their effects often diminish after they are integrated into large-sized samples and when tested at the macroscale. Currently, fabrication of large-sized samples with highly organized nanostructures is very difficult; most fabrication is performed by batch processing and depends on microfabrication that is not scalable, costly and produces toxic wastes.

“Why, and at what scale, such diminishing effects occur are yet to be determined, and they are expected to be different for each material, hierarchical structure and property,” said Yamamoto. “Multiple studies that have aimed to improve performance of aircraft, spacecraft, cars and buildings by mixing nanotubes into their structures have been unsuccessful because of the vast size difference between nanotubes and structures.”

Yamamoto believes that by not only mixing but also properly organizing the nanotubes within the materials, they’ll significantly improve and, hopefully, maximize material performance, particularly laminar strength. If successful, organized CNT networks could replace heavy metal reinforcements and mesh protection layers against lightning and electromagnetic interference, and they could also function as sensing and actuation layers.

Her long-term research goal is to realize bulk application of novel materials engineered at the nanoscale and microscale to deliver advanced and/or unconventional properties for materials to be used in various fields, including biomedical.

The $500,000 CAREER award will allow Yamamoto to recruit one doctoral student to help her delve deeper into this research.

Yamamoto also intends to use the award to promote diverse participation in science, technology, engineering and mathematics (STEM) careers, especially among women, and to close the gap between engineering education and real-world demands. In pursuit of these goals, she hopes to improve the climate for women in STEM fields through professional development activities conducted through the Penn State AeroWomen group, a community for female undergraduate and graduate students in the Penn State Department of Aerospace Engineering that provides opportunities for members to network with faculty, fellow students, alumni and industry personnel; to learn academic and professional skills; and to support each other.

She also plans to integrate project experiences based on the CDIO (conceive, design, implement and operate) theory into classes of all levels. Project-based classes will provide opportunities for students to acquire essential nontechnical skills, such as critical and creative thinking, consideration for contexts, ethical standards, independence and teamwork skills and more.

Yamamoto joined Penn State in 2014. She received her doctoral, master’s and bachelor’s degrees in aeronautics and astronautics from the Massachusetts Institute of Technology in 2011, 2006 and 2004, respectively.

In 2017, she, along with her collaborator Jogender Singh, professor of materials science and engineering at Penn State, received an Office of Naval Research (ONR) grant to study fundamental toughening mechanisms of novel ceramic composites and their use as alternative materials for high-temperature applications in the aerospace industry. In 2016, she and Singh received a grant through the Penn State Vertical Lift Research Center of Excellence for their project titled “Seamless Manufacturing of Hybrid-Material Turbines for High Temperature Rotorcraft Propulsion System by Field Assisted Sintering.” Yamamoto also received an ONR grant in 2016 for her research proposal titled “1D-Patterned Nanocomposites Structured Using Oscillating Magnetic Fields.”

NSF CAREER awards aim to support early-career faculty who have the potential to serve as academic role models in research and education and to lead advances in the mission of their department or organization. Activities pursued by early-career faculty should build a firm foundation for a lifetime of leadership in integrating education and research.