5-Jun-2017 10:00 AM EDT, by Perelman School of Medicine at the University of Pennsylvania contact patient services
favorite_border 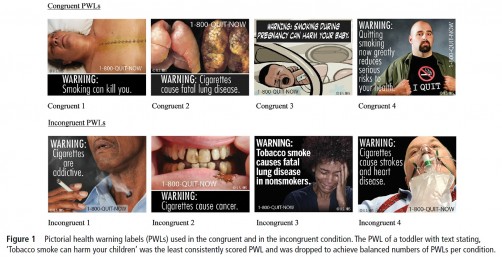 Pictorial health warning labels (PWLs) used in the congruent and in the incongruent condition.

Newswise — PHILADELPHIA – In recent years, smoking rates among adults in America have steadily declined; yet tobacco use remains the largest preventable cause of death and disease in the United States. Cigarette packages in most countries include a health warning label that describes the risks of using the product, but the position, size and design of the warnings may vary.  In the US, health warnings with pictures have been contested through the courts by the tobacco industry.  In a new study published recently in Tobacco Control, Penn researchers found that health warning labels that include images or Pictorial Warning Labels (PWLs) are more effective in gaining and holding the attention of smokers when the image and the text convey similar risks.

Strasser argues that research will help prove that images reinforce, not distract from, the important warning messages in text-only cigarette labels contrary to what some tobacco industry companies have claimed.

“It is interesting that much of the tobacco industry’s argument against PWLs is that they are mostly emotionally evocative, too graphic, or not factually true. Our study demonstrates, with non-intrusive, objective measures, that smokers engage a great deal with the images, which likely suggests they do not find them too graphic or off putting,” Strasser said.

“Adopting pictorial warning labels on tobacco products would be an improvement in communicating risk compared to the text-only versions currently on domestic packaging. This is an important and effective way to disseminate knowledge about health risks.”

In the study, Strasser and his team of researchers evaluated 112 daily cigarette smokers between the ages of 21 and 65 years old, and used eye-tracking to objectively observe how participants viewed congruent PWLs, where the images and text conveyed identical risk information, compared to incongruent PWLs, where image and text content differed.. Participants were later asked to recall the image, text and risk message from each PWL. The team found that smokers had relative greater difficulty recalling the text than they did recalling the image, and focused faster and longer on the image than the text. The researchers also observed that smokers who viewed congruent PWLs better recalled the information in those warnings at the end of the study. The study findings suggest that PWL formats where the image and text express similar messages or themes may be an optimal design strategy.

“The results clearly demonstrate that images in warnings get and hold viewing attention, as evidenced by the short latency to first view and the viewing duration of the images.  These are important processes in attention and learning theory, and may help us to more clearly understand how to maximize ways to convey risk information,” Strasser said.

In future studies, the researchers will examine how repeated exposure to PWLs affects recall as well as more complex communication constructs, such as changes in attitudes and beliefs toward tobacco products, intentions to quit smoking, changes in smoking behavior and decreases in smoke exposure using biomarker measures. Strasser’s team is also focused on examining how viewing patterns change over time when smokers are repeatedly exposed to PWLs and how accumulated exposure may be associated with more profound improvements on tobacco use and exposure.