Percussionist, flutist record at The Tank for Sonic Arts 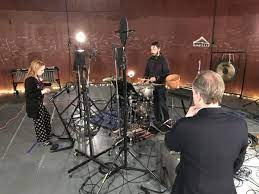 Associate professors Tammy Yonce, left, and Aaron Ragsdale, of the South Dakota State University School of Performing Arts assess the recording setup at The Tank Center for Sonic Arts with audio engineer Jamey Lamar. The two musicians recorded three pieces that exploit the venue’s unique acoustics in May through a grant from New Music USA. 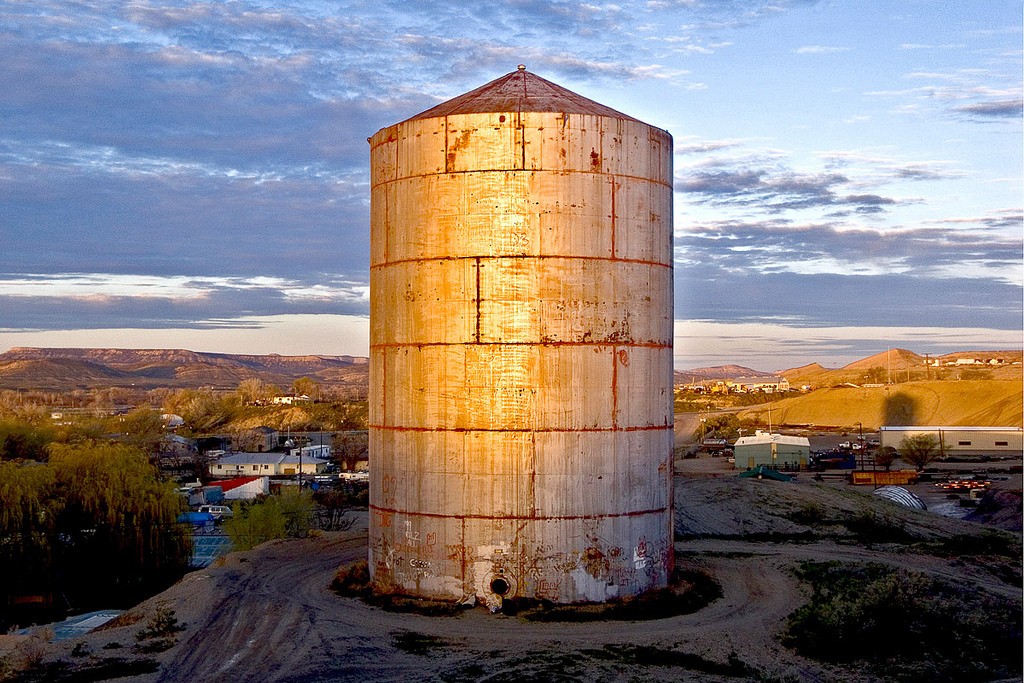 The Tank Center for Sonic Arts near Rangely, Colorado, is a rusted 60-foot tall steel water tank that has been transformed into a recording studio.

“It’s like playing in the best cathedral in Europe—except it’s this water tank.”

That’s how South Dakota State University associate professor Aaron Ragsdale, a percussionist, described recording new music with associate professor Tammy Evans Yonce, a flutist, in The Tank Center for Sonic Arts near Rangely, Colorado. The Tank is a rusted 60-foot tall steel water tank that has been transformed into a recording studio.

A grant from New Music USA covered the costs of commissioning four new pieces to exploit the venue’s unique acoustics, recording at The Tank and doing a video documentary. “New Music USA is a well-known funding source in the music community. The organization is interested in projects that are a little off the beaten path,” Yonce said.

The School of Performing Arts faculty members recorded three pieces at The Tank in May. “We’ve pretty much got an album,” Yonce said. They will decide later whether to release the recording online or as a CD. They also plan to perform all four pieces on campus and at area schools.

“In terms of acoustics, it has a cavern-like resonance,” Ragsdale said. “It’s a really long reverberation,” said Yonce, calling the venue “the intersection of time, space and sound.”

“To say it is an echo chamber is an understatement,” said professor Cable Hardin of the SDSU School of Design. He took photographs and video during the recording session. “Anything louder than a heartbeat I could feel in my ears.”

Recording at the site in the desert hills of northwestern Colorado came with challenges. Though it was cloudy a majority of the time, “during the 20 minutes when the clouds broke, we were basically standing in an oven,” Ragsdale recalled. Yonce said, “When it rained, it sounded like we were being attacked.”

The Tank is also a unique visual environment. “As it ascends, the roof falls into total darkness. With only accent lighting, you cannot see across the space,” Hardin said. “I think the visual translation of the performance will not only showcase the skills of Dr. Ragsdale and Dr. Yonce, but also highlight the engaging, innovative creative activity and research that artists and educators at South Dakota State are doing.”

Yonce described the new pieces as “atmospheric music that uses resonance and ring time to create interesting layers of sound.”

“The pieces we recorded are very different in terms of characteristics,” Ragsdale added.

Alan Theisen, an associate professor of music at Mars Hill University in North Carolina, composed “Anicca,” which means impermanence in Sanskrit. “Alan’s piece worked exceptionally well in The Tank,” said Ragsdale. “It calls for a sense of breath and space and letting the sounds develop. The acoustics of the environment become a third player in the composition.”

Minneapolis-based composer Joshua Clausen, whose works often incorporate history, wrote “Deluge,” which portrays how technological innovations are adversely affecting the Earth’s health. “There is a nice story behind the piece of collecting grain and thinking of us as being in a tank,” Ragsdale said.

Freelance composer Everette Minchew, who lives in southern Alabama, took snippets from a piece he wrote several years ago for Yonce’s New Music Ensemble and developed the new work, “Boreas.” The music was inspired by Boreas, the Greek god of the north wind and winter, familiar sounds to those who live on the prairies.

Though the fourth piece, “Helix,” composed by Katherine Bergman, was not recorded at The Tank, it will be part of the duo’s live performances.

Caption: The Tank Center for Sonic Arts near Rangely, Colorado, is a rusted 60-foot tall steel water tank that has been transformed into a recording studio.