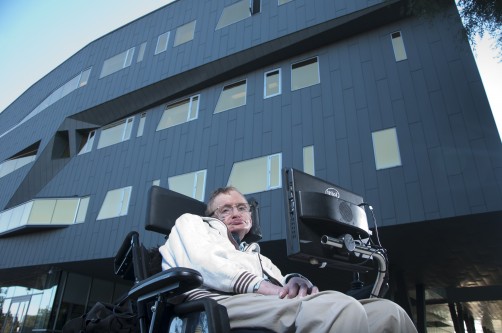 Newswise — March 14, 2018 (Waterloo, Ontario, Canada) – Perimeter Institute mourns the passing of Stephen Hawking, whose boundless intellect unveiled the workings of our universe and whose life remains an example of the power of the human spirit.

Colleagues and friends of Hawking’s at Perimeter, where he was a Distinguished Visiting Research Chair, remember him as an inspiration both professionally and personally.

Perimeter Director Neil Turok worked with Hawking at the University of Cambridge, where they became close collaborators and friends.

“Stephen’s life was heroic, in so many ways,” said Turok. “He was a brilliant visionary in theoretical physics, setting an incredibly bold agenda for the field. Uncompromising in his scientific honesty and his search for the truth, always willing to listen and to explore new ideas. He combined this with extraordinary personal warmth, an acute sense of humour, a deep love for people and for sharing good times together. His incredible power and determination to overcome the constraints of his condition was the ultimate example of mind over matter. Stephen’s passing is a very sad day for physics and for humankind. His spirit will live on in all of us who knew him, as we aspire, with all our hearts, to perpetuate the many wonderful human qualities he embodied."

Despite decades of declining mobility and the loss of his voice due to ALS, also known as motor neuron disease, Hawking inspired millions through his intellectual explorations of the universe and his popularization of modern cosmology.

His scientific contributions are vast: from his theoretical prediction that black holes emit radiation (now known as Hawking radiation), to sharpening our understanding of the beginning of the universe, to his work toward a unification of general relativity and quantum theory – the two pillars of modern physics.

Perimeter Institute was fortunate to host Hawking for several research terms, during which he collaborated with Perimeter researchers and students and shared his discoveries in a widely viewed televised public lecture.

In 2011, Perimeter had the great honour of opening the Stephen Hawking Centre – the only building in the world to which Hawking lent his name. At the opening of the centre, Hawking said “the importance of special places and special times, where magical progress can happen, cannot be overstated. I am hoping, and expecting, great things will happen here.”

In late 2017, Hawking personally endorsed Perimeter's new Centre for the Universe and kindly lent his name to a new fellowship for a young theoretical cosmologist: the Stephen Hawking Postdoctoral Fellowship at Perimeter Institute. The position is not yet filled.

The world has lost an irreplaceable scientist and human being with the passing of Stephen Hawking.

We celebrate his life and accomplishments by continuing to explore the farthest reaches of the universe the way he did: through the limitless power of curiosity, awe, and reason.

“Stephen's influence in science has been tremendous. His groundbreaking results serve as keystones on many of the exciting directions currently being pursued. His continuing to push the boundaries of knowledge despite all odds served as an inspiration to everyone around him and this was very palpable at all levels – from students to faculty and staff – every time he visited Perimeter.” – Luis Lehner, Faculty Chair at Perimeter Institute

"Stephen was an incredible scientist who has changed the way we think about the universe. Despite his disability, he had a great sense of humour and was able to do incredible things to inspire a lot of people. He was an inspiration for overcoming our challenges, to keep going, to always be kind to the people around us." – Raymond Laflamme, Perimeter associate faculty member and the former director of the Institute for Quantum Computing at the University of Waterloo, did his PhD under Hawking at Cambridge.