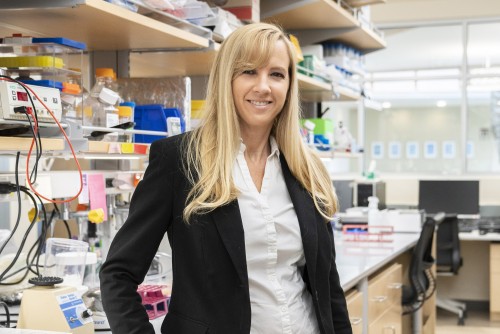 Newswise — SALT LAKE CITY – It’s a discovery more than seven years in the making that researchers believe will vastly illuminate our understanding of deadly brain tumors.

Gliomas are the most common type of central nervous system cancer but how these tumors develop is not fully understood. Sheri Holmen, PhD a researcher at Huntsman Cancer Institute  (HCI) and professor of surgery at the University of Utah just published the results of her research on gliomas in Cell Reports. The work is focused on a mutated gene that is a critical piece of the puzzle for glioma development, according to Holmen’s work.

A mutant form of the Isocitrate dehydrogenase 1 (IDH1) gene was previously shown to be expressed in at least 80 percent of lower grade gliomas and several other cancers. But whether, and how, mutant IDH1 contributes to tumorigenesis remained virtually unknown. Holmen’s studies provide substantial evidence demonstrating that mutant IDH1 functionally drives glioma development.

Years of work by other scientists guided Holmen’s team to find that mutant IDH1 doesn’t work by itself, it cooperates with many other mutations and events that go wrong in brain tumor cells. The success of this project required collaboration among multiple researchers and clinicians all over the world and utilized several types of sophisticated research equipment at HCI. “It forced us to get out of our comfort zone and learn about different pathways, different genes, what they do and put it all together to create the whole story,” said Holmen.

Holmen’s team first used genetic approaches in cells grown in the laboratory to dissect the role played by individual genes and pathways in glioma progression. This work pointed at a crucial role played by mutant IDH1 in glioma development. They then transitioned to a sophisticated mouse model that included several genetic changes and that allowed them to establish, for the first time, that mutant IDH1 promotes glioma development in live animals.  “By understanding the mechanism of this particular alteration, we can now further understand more of the biology of the disease, and we can exploit vulnerabilities and develop new therapeutics.” The team is the first who has succeeded in developing this type of glioma in a living organism and the research is regarded as a tour de force by her HCI colleagues. This tool will allow them to test new treatments and rapidly advance work aimed at identifying the best treatments for these glioma patients.

The next step for Holmen’s team is to conduct preclinical trials to test treatments in mice and gather information regarding efficacy and toxicity.

Holmen says that, for patients, the take-home message is that her team has made a discovery about gliomas that allows researchers and physicians to understand them in much greater depth. Additionally, they have identified a vulnerability in the tumor that can be exploited to the benefit of patients. “It could potentially give patients either a better quality of life and reduce the tumor burden and/or prevent them from progressing to a higher grade tumor and potentially eliminate the tumor altogether.”