Peruvian Pelicans Join the Flock in the Russell B. Aitken Sea Bird Colony At the Wildlife Conservation Society’s Bronx Zoo

Newswise — Four Peruvian pelicans have been added to the Russell B. Aitken Sea Bird Colony at the Wildlife Conservation Society’s Bronx Zoo.

Peruvian pelicans (Pelecanus thagus) were once considered a subspecies of the brown pelican, but are now classified as a distinct species. The white markings on their head and neck are more abundant than on the brown pelican, creating a beautiful pattern in the plumage.

Their natural range is along the west coast of South America, from Central Peru to southern Chile. They feed mostly on fish.

Pelicans are easily identifiable by their large beak and attached “gular” pouch that is used as a fishing net and can hold more than three gallons of water. They are one of the heaviest flying birds in the world and have air sacs beneath their skin to make them more buoyant in the water.

Peruvian pelicans are designated as Near Threatened by the International Union for Conservation of Nature (IUCN). Their numbers in the wild are stable, but climate change and habitat destruction are among the threats to this species. The Wildlife Conservation Society saves wildlife and wild places around the globe and in all of the world’s oceans. Among these places, WCS manages field conservation programs throughout South America and within the Peruvian pelican’s range. 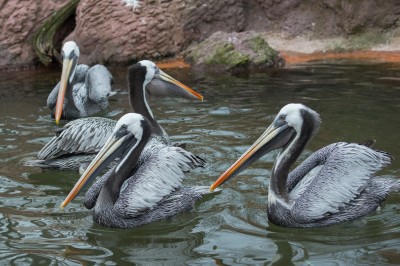 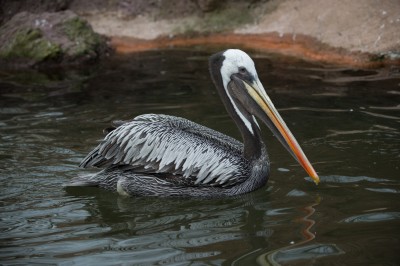