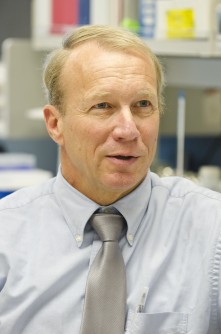 Dr. Oliver Press is a SWOG member and acting director of the Clinical Research Division at Fred Hutchinson Cancer Research Center in Seattle.

Newswise — PORTLAND, OR – Using PET imaging to guide chemotherapy treatment significantly increases the number of people who go into remission and also decreases toxic side effects for people with advanced Hodgkin lymphoma, according to research conducted by SWOG and two other National Cancer Institute research groups.

The Journal of Clinical Oncology published results of the clinical trial on April 11, along with an editorial. Dr. Oliver Press, a SWOG member at Fred Hutchinson Cancer Research Center and the lead author of the JCO article, said the study is exciting because it’s the first large-scale U.S. trial to test this treatment approach with people with Hodgkin lymphoma, a cancer of the immune system that struck an estimated 9,050 Americans last year.

“The goal of cancer treatment is to cure as many people as possible with as little toxicity as possible,” said Press, the acting director of the Clinical Research Division and the acting senior vice president of Fred Hutch and a professor of medicine at University of Washington. “We found a promising way to do that by tailoring treatment to Hodgkin patients, an approach which could lead to a new standard of care.”

Doctors routinely use PET scans to detect cancer. In this study, they used this form of medical imaging to help treat cancer, too. Investigators tested “response-adapted therapy” with Stage III and IV Hodgkin patients – people whose cancer had spread throughout their lymphatic system and often into other parts of their body. These patients have the lowest chance for recovery.

Here’s how the study worked.

Researchers recruited 358 Hodgkin patients to the trial and were able to evaluate 331 of them. All trial volunteers were given two rounds of ABVD, the standard, four-drug chemotherapy regimen used to treat Hodgkin patients after diagnosis. Then everyone received a PET scan to gauge response to the initial treatment. If the scan was negative, and the cancer appeared to be gone, this group received a final four cycles of ABVD. Patients whose scan was positive, however, were given six cycles of a chemotherapy regimen called eBEACOPP, a seven-drug combination used in Europe. This treatment is both powerful and harmful. Some Europeans who’ve received eBEACOPP treatment became infertile, sustained heart or lung damage, and sometimes were put at greater risk of secondary cancers such as leukemia.

The results of the SWOG trial were striking. Typically, if Hodgkin patients get two rounds of ABVD treatment, and a PET scan still shows the presence of cancer, about 15 to 30 percent will be cancer-free after two years. However, the SWOG trial showed that 64 percent of patients who were switched to eBEACOPP treatment after the PET scan were cancer-free after two years. That’s more than double the expected remission rate expected for this group.

As predicted, patients who got a clear scan and were treated exclusively with ABVD treatment fared even better. In this group, 82 percent were alive and cancer-free after two years.

“What’s also important is that only 20 percent of the patients in our trial were exposed to eBEACOPP – which means they weren’t exposed to its bad effects,” said Dr. Jonathan Friedberg, a longtime SWOG member and the director of the James P. Wilmot Cancer Institute at the University of Rochester Medical Center. “That’s important because many people diagnosed with Hodgkin lymphoma are in their 20s and 30s and want to have children. This response-adapted therapy would ensure that the people who need the more toxic drugs receive them – and would spare others from infertility and serious toxicities.”

SWOG managed the trial with support from the Alliance for Clinical Trials in Oncology and ECOG-ACRIN. All three groups enrolled patients to the trial, and Alliance experts read all PET scans centrally to ensure consistency. Researchers from the NCI’s AIDS Malignancy Consortium also participated. SWOG, the Alliance, and ECOG-ACRIN are part of the NCI’s National Clinical Trials Network.

The NCI provided the majority of funding for the study. The David and Patricia Giuliani Family Foundation, the Lymphoma Foundation, the Adam Spector Fund for Hodgkin Research, and the Ernest & Jeanette Dicker Charitable Foundation provided additional support. A National Institutes of Health’s American Recovery and Reinvestment Act grant supported some of the PET imaging.

SWOG is a worldwide network of nearly 12,000 physicians, scientists, research associates, and other members that design and conduct cancer clinical trials. The group’s goal is to change medical practice so it improves the lives of people with cancer. SWOG trials are also aimed at better preventing cancer, the second leading cause of death in the U.S. Founded in 1956 and based at the Knight Cancer Institute at Oregon Health & Science University, SWOG receives major funding from the National Cancer Institute and is part of its National Clinical Trials Network, the oldest and largest cancer research network in the nation. SWOG also receives philanthropic support from The Hope Foundation, its public charity.