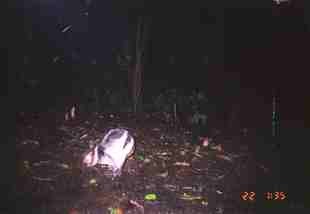 The Sumatran striped rabbit is one of the rarest rabbits in the world, known only from a handful of photos, including this recent one from the forests of Sumatra.

Newswise — Hippity, hoppity"¦click! So went the latest appearance of one of the world's rarest rabbits, captured on film by a camera trap in the rain forests of Indonesia, according to researchers from the Wildlife Conservation Society.

In fact, the Sumatran striped rabbit—a little over a foot in length with brown stripes—is so rare that recent photos taken in Bukit Barisan National Park are only the third ever recorded, the first dating from 1998 in Kerinci Seblat National Park, and the second taken from Bukit Barisan National Park in 2000. Before that, the last confirmed sighting by scientists of a living animal dated from 1972, and only 15 specimens exist in museums, all dating from before1929. It is currently listed as 'Critically Endangered' by the World Conservation Union (IUCN).

"This rabbit is so poorly known that any proof of its continued existence at all is great news and confirms the conservation importance of Sumatra's forests," said Colin Poole, Director of the Wildlife Conservation Society's Asia Program.

The rabbit is only known to exist from forests along the mountainous spine of Sumatra, and was thought to be the only representative of its genus. In 1999, however, researchers discovered another striped rabbit in the Annamite Mountains that straddle Lao PDR and Vietnam. Although both species seem similar in appearance, genetic samples from both revealed the Sumatran and Annamite striped rabbits are closely related but separate species from one another. According to the findings, both species have been diverging for approximately 8 million years.

Researchers also report that no colored eggs or baskets were found at the study site.