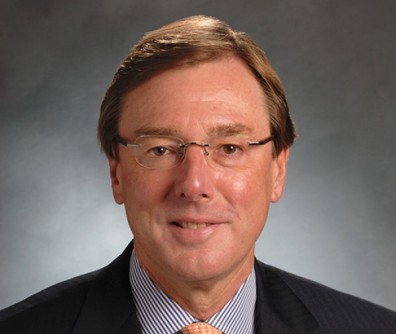 Newswise — RESEARCH TRIANGLE PARK, NC – Peter M. Scott III was elected chair of RTI’s board of governors on December 13 during the Institute’s annual election of corporate governors and officers.

Scott succeeds William (Bill) Moore Jr. who served as Board chair since 2010 and is the fourth chair to serve RTI since its founding in 1958.

“It is my honor to accept the position of board chair at RTI International,” said Scott.  “I look forward to working closely with management and the board of governors to advance the mission of RTI.”

Serving on RTI’s board of governors since 2001 and as vice chair since 2010, Scott has made significant contributions to the governance and leadership of RTI.  He chaired the Audit Committee for many years and is a member of the Audit, Finance, Compensation, and Governance and Nominating Committees.

“Peter Scott has made tremendous contributions as a member of our board of governors, and will provide outstanding leadership in his new role as Board chair,” said RTI International President and CEO E. Wayne Holden, Ph.D.

Scott observed that Bill Moore, who will remain on the RTI board of governors, has provided exceptional leadership to RTI’s Board, including overseeing the process leading to the election of E. Wayne Holden as RTI’s fourth president and CEO and recruiting extraordinary talent to RTI’s Board.

“Under Bill’s tenure as Board chair, RTI has charted a course leading to financial growth, enhanced scientific stature and continued commitment to RTI’s mission of improving the human condition,” Scott stated.