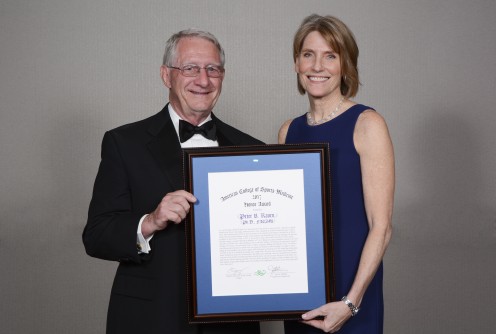 Newswise — INDIANAPOLIS, IN- The American College of Sports Medicine is pleased to announce that Peter B. Raven, Ph.D., FACSM, has been named the recipient of its 2017 Honor Award. Dr. Leon was selected for this award to recognize his outstanding achievements in the field of sports medicine. He was recognized at an awards banquet during the association’s recent annual meeting.

“The ACSM Honor Award is granted each year to an individual with a distinguished career of outstanding scientific and scholarly contributions to sports medicine and/or the exercise sciences,” said Walter Thompson, president of ACSM. “We’re happy to recognize Dr. Raven’s tremendous accomplishments.”

Dr. Raven received his certification as a physical education teacher from St. Luke’s College, University of Exeter in 1965. Subsequently, he received his undergraduate degree in 1966 in Health, Physical Education and Recreation as well as his masters (1967) and doctoral (1969) degrees in Scientific Basis of Physical Education from the University of Oregon in Eugene. He then completed a post-doctoral fellowship in Exercise Physiology at the University of California at Santa Barbara (1970). In 1975, Dr. Raven moved to Dallas, Texas to work at the Institute of Aerobic Research eventually accepting an Associate Professorship in Physiology (1977) at the fledging Texas College of Osteopathic Medicine in Fort Worth (now known as UNTHSC). After a long and illustrious career at UNTHSC, including a chairmanship of the Department of Integrative Physiology (1993-2001), Dr. Raven recently retired as a Professor of Integrative Physiology and Orthopedics (2016).

Dr. Raven has contributed an astounding 250+ scientific works to the exercise science and sports medicine literature. He also has been an active and involved member of ACSM, including charter membership in the ACSM Foundation Board of Directors (1984-87) serving as ACSM President in 1987-88 and editor-in-chief of Medicine & Science in Sports & Exercise®.  Most importantly, the world class mentoring provided by Dr. Raven is directly responsible for the significant scientific contributions of his 100+ former graduate and post graduate students.