5-Aug-2016 8:05 AM EDT, by Missouri University of Science and Technology
favorite_border 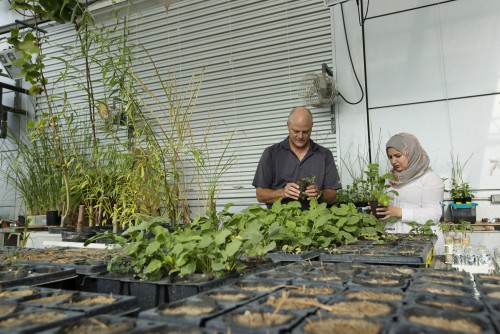 Dr. Joel Burken and Mariam Al-Lami inspect the progress of her project in the Baker Greenhouse at Missouri S&T.

Newswise — VIBURNUM, Mo. – For more than 150 years, The Doe Run Co. has tapped the fertile mineral resources of southeast Missouri to mine the lead, copper and zinc that remain staples of products ranging from car batteries to X-ray equipment and military satellites.

While these Missouri mines represent some of the world’s largest lead deposits, the mines will eventually close once their resources are fully extracted, and Doe Run will remediate the sites as required.

Thanks to the work of a Missouri University of Science and Technology doctoral student in civil and environmental engineering and her faculty mentors, mine remediation of former mine tailings impoundments could receive an organic boost from a product most communities are eager to get rid of — sewage sludge from a municipal wastewater treatment plant. Mine tailings are the ground-up rock byproducts created when separating mineral from waste rock as part of the milling process.

The research by Ph.D. student Mariam Al-Lami and Dr. Joel Burken, Curators’ Distinguished Professor of civil, architectural and environmental engineering and the department’s newly named chair, is the outgrowth of a 2012 research agreement between the university and Doe Run. Now their work is attracting national attention.

A study initiated in 2012, in conjunction with MFA Oil Co., examined the use of Miscanthus grass to help transform mine tailing sites into potential biofuel sources.“Miscanthus is proven to be one of few plants that can thrive in challenging conditions, such as tailings,” says Dr. Eva Gonzales, a Saint Louis University plant biologist and a member of Al-Lami’s dissertation committee.

The new work builds on that earlier effort by broadening the revegetation sources to include poplar and willow trees to assess their utility in promoting growth atop the tailings impoundments.

“Those tailings impoundments have little vegetation cover,” explains Al-Lami.Working in the rooftop Baker Greenhouse at Butler-Carlton Civil Engineering Hall, the research team compared the effect of adding nutrient-rich biosolids to the plants grown in tailings in combination with several different types of commercially available soil additives, such as biochar, a charcoal-based product.

The team hopes to translate the greenhouse findings to field trials on parts of a 300-acre tailings impoundment at Doe Run’s old Mine 28 in Viburnum. The tailings are initially added to impoundments that fill up with tailings over the life of the mine.

The encouraging lab results earned Al-Lami the top student paper at the American Society of Mining and Reclamation’s annual meeting, which was held in early June in Spokane, Washington. The Iraq native also received an ASMR scholarship to attend the conference, including a $2,000 award.

“In this research, Mariam is really doing great work that is solid scientifically and impactful for our society,” Burken says.

Al-Lami is presenting her research findings at the Ecological Society of America conference in Fort Lauderdale, Florida. The conference runs Aug. 7-12.

“This work has been very rewarding on many levels,” says Burken. “Working collaboratively with Doe Run, we are looking at long-term solutions.

“Balancing development and societal gains with ecological restoration and protecting human health is really the core of our field.”

“It’s very timely work,” adds Doe Run asset development director Chris Neaville, an S&T graduate with a bachelor’s degree in geological engineering. ”It’s been a very useful piece of research that will have some practical applications.”

The ASMR presentation by Burken and Al-Lami is titled, “The potential of biosolids and other amendments for revegetation of lead/zinc mine tailings with three biomass crops: greenhouse study.”