Newswise — The Amazon Rainforest produces more than 20 percent of the world’s oxygen, 20 percent of the world’s freshwater and is home to more than 150,000 species of plants rich in beneficial nutrients, phytochemicals and active elements. Many of these plants are the source of some of the most widely used and lifesaving medicines, which have antioxidant, antibacterial and anti-inflammatory properties used to treat type II diabetes, Alzheimer's disease, among others.

For centuries, indigenous people of the Rainforest have used many of these plants for medicinal purposes and their empirical plant knowledge is widely respected by the scientific community. Theory has it that how they select these medicinal plants is not random. The idea is that selection is influenced in part by the therapeutic efficacy of the plants and therefore certain groups of plants would be favored over others.

To put this non-random selection theory to test, researchers from Florida Atlantic University’s Charles E. Schmidt College of Science and collaborators worked with residents of the Kichwa community, the largest indigenous ethnic group in the Ecuadorian Amazon with a population of 60,000. This region stretches from Brazil through Venezuela, Colombia, Bolivia and Peru.

The study, published in the Journal of Ethnopharmacology, is the first to analyze data collected at the village-level rather than the national level to guarantee that the estimates of medicinal plant families are consistent with the availability of these families locally. It also is one of the most diverse studies of the non-random medicinal plants selection because it includes analysis by gender, age and exposure to outside influences from working with ecotourism projects.

For the study, researchers worked with individuals from the Kichwa communities of Chichico Rumi and Kamak Maki. They discovered a novel method to uncover the intracultural heterogeneity of traditional knowledge while testing the non-random selection of medicinal plants and exploring overuse and underuse of medicinal plant families in these communities.

The different socio-cultural factors included in the study revealed interesting results. Researchers identified 101 medicinal species from 54 families of plants. Study participants affiliated with the Chichicu Amarun museum, in operation for only one year, named more medicinal plants than participants affiliated with the Kamak Maki museum, in operation for more than 36 years. In addition, researchers found that the men in the study named slightly more medicinal plants than the women, which was an unexpected finding. Participants ages 40 and older named more species than younger participants, a finding that concurs with previous literature showing that traditional knowledge increases with age.

“Exploring the gender dimension in our study yielded some very interesting results such as men being more knowledgeable about plants than women,” said Daniela M. Robles Arias, senior author and a graduate student at FAU. “Women are said to be more knowledgeable about medicinal plants because they take care of the young and work more in the chakras or fields. We observed a different trend in our study. Men cited slightly more medicinal plant species than women, and the two genders over-use different families. These findings might suggest that both genders are equally knowledgeable, although in different areas.”

In the Chichico Rumi community, researchers found that the different over- and under-utilized medicinal plant families identified depending on number of years involved with ecotourism, gender, and age made the intra-cultural variation of traditional knowledge evident.

“Because people working for Kamak Maki have been exposed for a longer time to foreign cultures and markets, they are more likely to have replaced some of their traditional remedies with more modern ones,” said Maria Fadiman, Ph.D., co-author and an associate professor in FAU’s Department of Geosciences. “Furthermore, ecotourism is a profit-making venture, and there is an inverse association between increasing wealth and ethnobotanical knowledge.”

This study is the first to report Urticaceae and Solanaceaeas as overused for medicine in the Holotropical kingdom. Urticaceae contains polyphenols with anti-inflammatory activity as well as oxygenated fatty acids known to have anti-inflammatory and antimicrobial properties. Similarly, the phytochemistry of Solanaceae is promising because its species biosynthesize a wide variety of secondary metabolites. Another overused medicine in this study was Asteraceae – members of this family produce many biological compounds that have therapeutic benefits. The most underutilized medicinal plant family was Orchidaceae.

This study provides evidence that the predictions made by the non-random selection of medicinal plants theory hold true for small-scale studies, such as one single indigenous community. Most of the over- and under-utilized medicinal plant families the researchers identified concur with results from other studies, strengthening the non-random medicinal selection theory. This research elucidates that it is promising to explore more factors when testing if there are phylogenetic biases in traditional pharmacopeias. 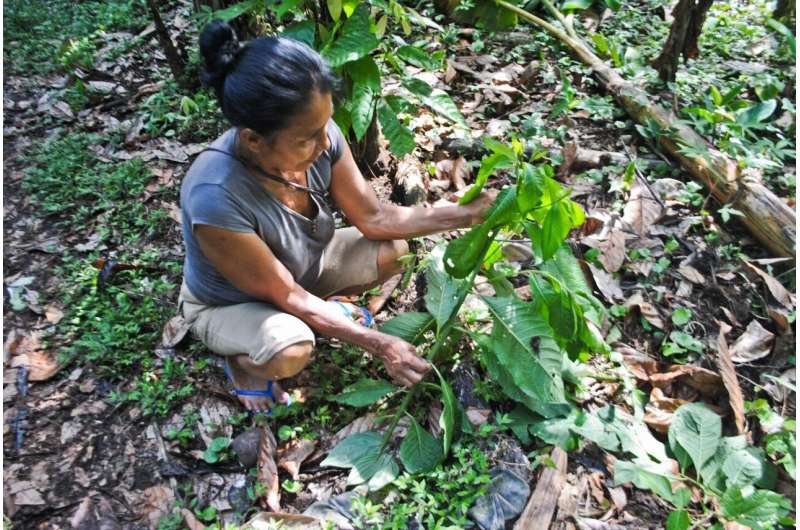 Caption: A kichwa woman shows "lenchig" (Vernonanthura patens (Kunth) h. Rob., Asteraceae family) growing in her homegarden. A decoction of the leaves of this plant is used as an analgesic. Caption: Daniela M. Robles Arias, first author (left) interviews a Kichwa woman (right). The woman is showing the white, tender inner core, also called "palmito” of the "chontaduro" palm (Bactris gasipaes, Arecaceae family). The Kichwa woman explains that "palmito" is consumed for food and is praised for its nutritious value, which makes it a good food for children to prevent malnutrition. The roots of this palm also are used to treat hair loss. 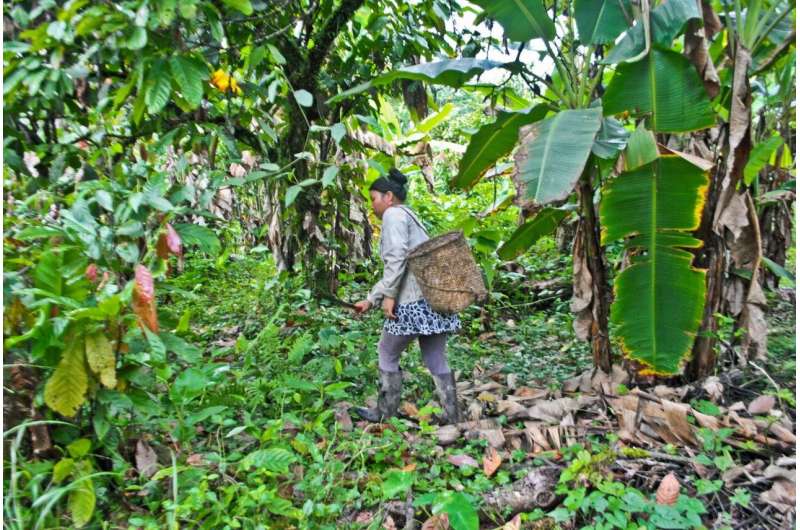 Caption: A kichwa woman walks in her "chakra" or field. In the picture, plantain (Musa spp., Musaceae family) is visible as well as cacao (Theobroma cacao, Malvaceae family). These two plants in addition to being consumed for food are used medicinally. The flower of the plantain is used in medicinal concoctions for postpartum care and the young leaves are used in infusions to treat stomach aches or treat cuts. The bark of the cacao tree is used in infusions to treat snake bites, cuts and wounds.