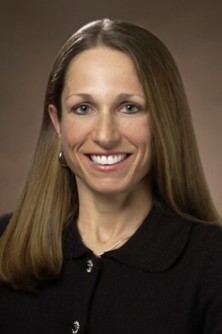 Newswise — An article published in the January issue of the International Journal of Radiation Oncology, Biology and Physics reports results of the Radiation Therapy Oncology Group (RTOG) phase II clinical trial of Bevacizumab (Avastin) in addition to cisplatin and pelvic radiation for locally advanced cervical cancer. The group reports that the addition of Bevacizumab to the existing standard of care was safe and showed promising overall results. The 2- and 3- year overall survival rates were 89.8 percent and 80.2 percent, respectively.

"Cervical cancer is a huge problem worldwide, but isn't as big a problem in the United States. So in many ways it tends to become a somewhat overlooked and under-studied disease," says Tracey Schefter, MD, investigator at the University of Colorado Cancer Center, director of the Stereotactic Body Radiation Therapy program at the University of Colorado School of Medicine, and the study's lead author.

The current phase II clinical trial enrolled 49 eligible patients from 28 institutions in the years 2006-2009. The study previously reported that Bevacizumab was safe and well-tolerated in combination with cisplatin and radiation therapy in this population. Now the group reports on the secondary efficacy endpoints at a median follow-up time of 3.8 years.

Specifically the group evaluated the addition of 10mg/kg bevacizumab every two weeks for 3 cycles during chemoradiation. The overall survival and locoregional control results were favorable in comparison to historical controls of chemoradiation without bevacizumab and warrant further study in a phase III trial.

"Parenthetically, when we were designing this trial, one thing we discussed at length was whether to include a maintenance phase of bevacizumab after chemoradiation. Because of perceived issues with patient compliance at the time, we decided not to add to the overall duration of treatment by adding maintenance Bevacizumab. Based on the recent results of GOG 240 which showed an overall survival benefit when Bevacizumab was added to first line chemotherapy for patients with metastatic disease, a trial addressing the benefit of both concurrent and maintenance bevacizumab for locoregionally advanced cervical cancer will likely need to be done," Schefter says.