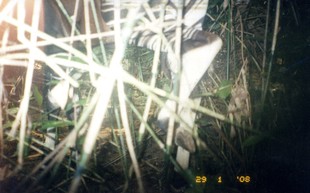 A camera trap photo revealed a rare okapi in Congo's Virunga National Park -- the first one seen here in 50 years.

Newswise — A set of stripy legs in a camera trap photo snapped in an African forest indicates something to cheer about, say researchers from the Wildlife Conservation Society. The legs belong to an okapi—a rare forest giraffe—which apparently has survived in the Democratic Republic of Congo's Virunga National Park, despite over a decade of civil war and increased poaching.

"This is the first time this species has been captured on film in this park. Known to occur in the park from the early 1900s it had not been seen here for over 50 years. Two years ago sightings of dung and other tracks were made in the park by a team of pygmy trackers who knew Okapi sign. It is very encouraging to see that this animal has survived," said WCS researcher, Deo Kujirakwinja, who organized the recent camera trap survey. "Many animals have suffered in this park as a result of the ten years of insecurity in the region, so it's encouraging to see that the okapi has survived."

Measuring up to 8 feet in length and standing up to 6 feet at the shoulder, the okapi has striped legs that give the animal a superficial resemblance to a zebra. It is, in fact, a close relative of the much larger giraffe. The animal's current range occurs in the Ituri Forest in northern DR Congo. They are classified as Near Threatened by the World Conservation Union (IUCN) and are at risk primarily from habitat destruction.

The photograph was taken during some field surveys of the northern forests of the Virunga Park, an area that has been little visited historically because of the density of the forest and its remoteness. This region has also been the hideout of a rebel group (ADF " Allied Democratic Front) who have been battling the government of Uganda unsuccessfully for over 20 years. They have been hiding in Congo for many years now and it is only recently that it has become safe to enter this part of the park. Funded by the USFWS, these surveys aimed to assess the impact of the war on the fauna and flora of this region. Preliminary results indicate that many antelope species are at low density but that some species such as chimpanzees have survived fairly well.

"The recent evidence that okapis still exist in the Virunga National Park is a good indication that large wildlife can rebound in areas impacted by unrest and poaching," said Dr. Andrew Plumptre, director of WCS's Albertine Rift Program.

The Wildlife Conservation Society saves wildlife and wild places worldwide. We do so through science, global conservation, education and the management of the world's largest system of urban wildlife parks, led by the flagship Bronx Zoo.

Together these activities change attitudes towards nature and help people imagine wildlife and humans living in harmony. WCS is committed to this mission because it is essential to the integrity of life on Earth. Visit: http://www.wcs.org