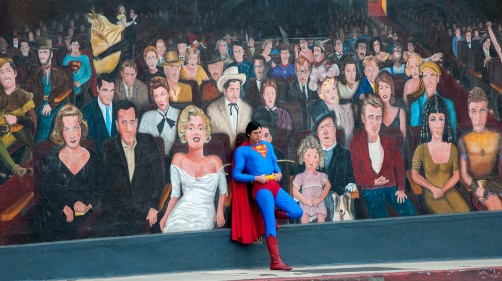 WHAT: “Flesh and Stone, A Conversation,” paired works by Scot Sothern and Andy Romanoff.

About the Artists and “Flesh and Stone, A Conversation”

Andy Romanoff, known for his portraits, architecture, and fine art photography has also been a sought after cameraman, designer, and inventor working in Hollywood for over five decades. Recognized for his expertise in motion picture and television equipment development, he co-founded First Light Video Publishing, an early instructional video company specializing in programs on media production, and opened Louma L.A., a company devoted to the development and rental of remote control equipment for moving cameras. In 1997, Panavision purchased Louma L.A. and Romanoff became president of Panavision Remote Systems, and in 2006, the company’s Executive Vice President of Technical Marketing and Strategy.

Speaking about putting the exhibition together Romanoff said “Many of our images record the struggles of humanity whether on the faces of the thousand year old gods or tonight’s homeless. Over and over we were struck by the expressions, and the universality of the emotions. As we paired the pictures it seemed they spoke with one another across cultures and time. They told us the poor, the hurt, the abused and the confused have always been with us and that artists have always looked at them. Here’s how we see it.”

Scot Sothern, a photographer and writer renowned for his controversial black and white images of prostitutes in Southern California he photographed from 1986 to 1990, contributes to the exhibition an honest and desperate exposé of those living on the streets of Los Angeles. His first solo book “Lowlife” (2011, Stanley Barker; 2013, powerhouse Books) was published in the United Kingdom, and branded “The year’s most controversial photobook” by the British Journal of Photography. Sothern has also published “Curb Service: A Memoir” (2013, Soft Skull Press) and “Streetwalkers” (2016, powerHouse Books).

“I began shooting these ‘Drive-By Photographs’ in 2010 from the shotgun seat of my car. Looking at the pictures now, it seems a bright yellow halo should be floating atop their heads,” said Sothern. “Pairing these photographs with Andy’s wonderful religious icons somehow render my subjects saintly, while his icons [sacred images of many cultures photographed in churches, temples and museums] come alive to share the laughter and, more often, the pain.”