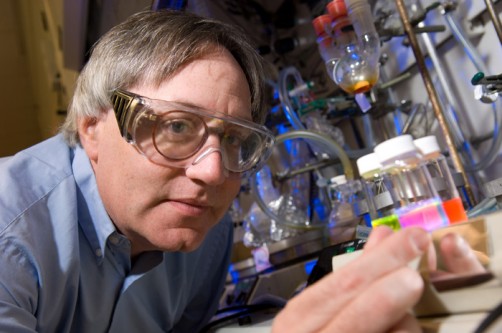 Georgia Tech professor Seth Marder is part of the team that developed a new photonic material that could facilitate all-optical signal processing. 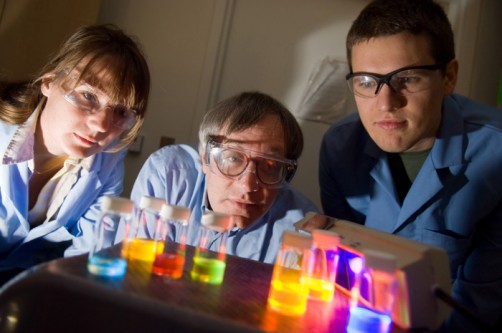 Georgia Tech professor Seth Marder, center, is part of the team that developed a new photonic material that could facilitate all-optical signal processing. 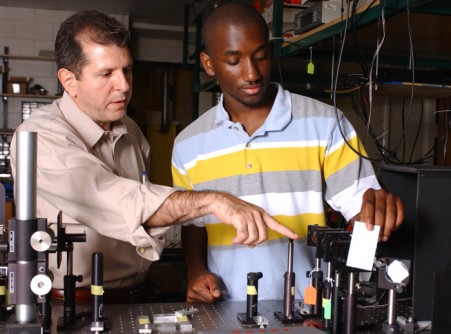 Georgia Tech professor Joseph Perry, left, is part of the team that developed a new photonic material that could facilitate all-optical signal processing.

Newswise — A class of molecules whose size, structure and chemical composition have been optimized for photonic use could provide the demanding combination of properties needed to serve as the foundation for low-power, high-speed all-optical signal processing.

All-optical switching could allow dramatic speed increases in telecommunications by eliminating the need to convert photonic signals to electronic signals – and back – for switching. All-optical processing could also facilitate photonic computers with similar speed advances.

Details of these materials – and the design approach behind them – were reported February 18th in Science Express, the rapid online publication of the journal Science. Conducted at the Georgia Institute of Technology, the research was funded by the National Science Foundation (NSF), the Defense Advanced Research Projects Agency (DARPA) and the Office of Naval Research (ONR).

“This work provides proof that at least from a molecular point of view, we can identify and produce materials that have the right properties for all-optical processing,” said Seth Marder, a professor in the Georgia Tech School of Chemistry and Biochemistry and co-author of the paper. “This opens the door for looking at this issue in an entirely different way.”

The polymethine organic dye materials developed by the Georgia Tech team combine large nonlinear properties, low nonlinear optical losses, and low linear losses. Materials with these properties are essential if optical engineers are to develop a new generation of devices for low-power and high-contrast optical switching of signals at telecommunications wavelengths. Keeping data all-optical would greatly facilitate the rapid transmission of detailed medical images, development of new telepresence applications, high-speed image recognition – and even the fast download of high-definition movies.

But favorable optical properties these new materials developed at Georgia Tech have only been demonstrated in solution. For their materials to have practical value, the researchers will have to incorporate them in a solid phase for use in optical waveguides – and address a long list of other challenges.

“We have developed high-performing materials by starting with optimized molecules and getting the molecular properties right,” said co-author Joseph Perry, also a professor in the Georgia Tech School of Chemistry and Biochemistry. “Now we have to figure out how to pack them together so they have a high density and useful physical forms that would be stable under operation.”

Marder, Perry and collaborators in Georgia Tech’s Center for Organic Photonics and Electronics (COPE) have been working on the molecules for several years, refining their properties and adding atoms to maximize their length without inducing symmetry breaking, a phenomenon in which unequal charges build up within molecules. This molecular design effort, which builds on earlier research with smaller molecules, included both experimental work – and theoretical studies done in collaboration with Jean-Luc Bredas, a also a professor in the School of Chemistry and Biochemistry.

The design strategies identified by the research team – which also included Joel Hales, Jonathan Matichak, Stephen Barlow, Shino Ohira, and Kada Yesudas – could be applied to development of even more active molecules, though Marder believes the existing materials could be modified to meet the needs of all-optical processing

“For this class of molecules, we can with a high-degree of reliability predict where the molecules will have both large optical nonlinearities and low two-photon absorption,” said Marder. “Not only can we predict that, but using well-established chemical principles, we can tune where that will occur such that if people want to work at telecommunications wavelengths, we can move to where the molecules absorb to optimize its properties.”

Switching of optical signals carried in telecommunications networks currently requires conversion to electrical signals, which must be switched and then converted back to optical format. Existing electro-optical technology may ultimately be able to provide transmission speeds of up to 100 gigabits-per-second. However, all-optical processing could theoretically transmit data at speeds as high as 2,000 gigabits-per-second, allowing download of high-definition movies in minutes rather than hours.

“Even if the frequency of signals coming and going is high, there is a latency that causes a bottleneck for the signals until the modulation and switching are done,” Perry explained. “If we can do that all optically, then that delay can be reduced. We need to get electronics out of the system.”

Perry and Marder emphasize that many years of research remain ahead before their new materials will be practical. But they believe the approach they’ve developed charts a path toward all-optical systems.

“While we have not made all-optical switches, what we have done is provide a fundamental understanding of what the systems are that could have the combined set of properties that would make this possible,” Marder said. “Conceptually, we have probably made it over the hump with this class of molecules. The next part of this work will be difficult, but it will not require a fundamental new understanding of the molecular structure.” 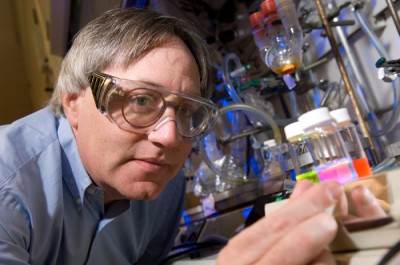 Caption: Georgia Tech professor Seth Marder is part of the team that developed a new photonic material that could facilitate all-optical signal processing. 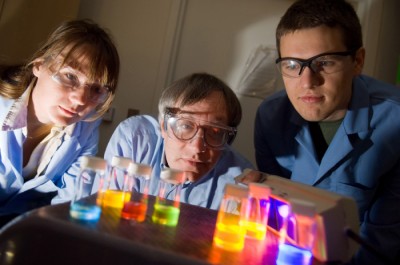 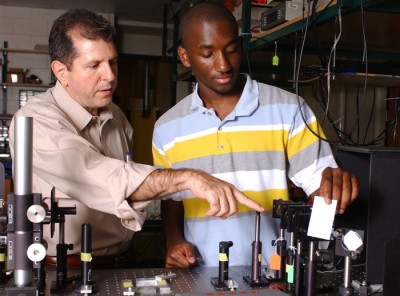