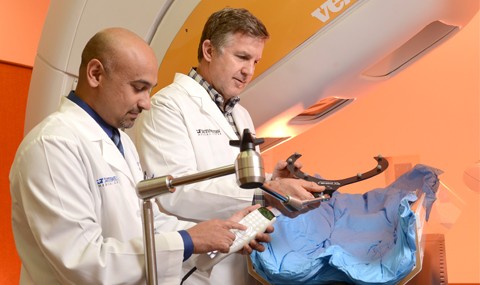 Newswise — DALLAS – April 07, 2015 – UT Southwestern Medical Center Kidney Cancer Program investigators have published what is believed to be the first reported successful use of stereotactic body radiation therapy for an often deadly complication of kidney cancer.

Two case studies provide an important potential new avenue for treatment of these types of tumors, which are resistant to traditional radiation therapies and difficult to manage even with surgery, the current standard of care.

“Our case studies showed similar survival with the use of stereotactic radiation therapy compared with surgery,” said lead author Dr. Raquibul Hannan, Assistant Professor of Radiation Oncology and co-leader of the Kidney Cancer Program at the Harold C. Simmons Comprehensive Cancer Center. “This result is important because people with this disease have a traditionally poor prognosis and few options.”

The stereotactic ablative radiation therapy (SABR) was used to treat inferior vena cava tumor thrombus (IVC-TT) that reached the heart, a complication of kidney cancer in which the tumor extends into the venous system − the system of veins that return blood to the heart. An estimated 4 to 36 percent of kidney tumors are associated with IVC-TT, according to the study in Cancer Biology & Therapy.

"Removing the tumor surgically currently is the only treatment proven effective. It is still considered an extremely difficult and delicate surgery, with high rates of complications and cancer recurrence,” said Dr. Vitaly Margulis, Associate Professor of Urology. As detailed in a recent study by Dr. Margulis in The Journal of Urology, “Patients with the disease who undergo surgery have a mortality rate that can be as high as 10 percent, depending on the location of the tumor and its growth into the venous system. There are currently no alternatives for those who are not surgical candidates.”

“For these reasons, finding new therapies such as stereotactic radiation therapy are desperately needed,” Dr. Hannan said. “This innovative proof-of-principle was a critical first step for determining whether our approach will ultimately prove to be effective.”

Kidney cancer is a common and often deadly malignancy, with more than 63,900 new cases and 13,800 deaths predicted in the U.S. in 2014. And it is on the rise. Research suggests kidney cancer cases are increasing at a rate of about 4 percent annually. In addition, IVC-TT can be difficult to diagnose because patients may have no symptoms or a wide variety of symptoms that can be attributable to many other conditions. Left untreated, IVC-TT can lead to severe complications including pulmonary tumor embolus (tumor clots in the lung), Budd-Chiari syndrome (a serious liver condition), and even fatality.

These case studies – one case of recurrent and another with unresectable IVC-TT − demonstrate that SABR can be an effective treatment. The reported survival times of 18 months and 24 months were comparable to standard surgical outcomes and both improved symptomatically, and did not experience any acute or late treatment-related toxicity, the researchers reported. UT Southwestern’s kidney cancer team hopes to follow up with a study to evaluate the application of SABR for IVC-TT in conjunction with surgery.

Dr. Robert Timmerman, senior author of the study, Vice Chairman of Radiation Oncology, Director of the Annette Simmons Stereotactic Treatment Center, Professor of Radiation Oncology and Neurological Surgery, and Director of Clinical Research in Radiation Oncology, was one of the first researchers in the world to use stereotactic ablative radiotherapy (SABR), also known as stereotactic body radiation therapy (SBRT), for cancers in the body. This revolutionary technique, originally developed to treat brain cancer, relies on highly advanced imaging, treatment planning and radiation delivery technology to deliver an extremely potent dose with extreme precision from multiple angles and it has been shown to offer better cure rates for many cancers, particularly in cancers that have spread (metastasized). Dr. Timmerman, who holds the Effie Marie Cain Distinguished Chair in Cancer Therapy Research, has championed the use of SABR globally and has served as the lead investigator in several national trials designed to evaluate the efficacy and safety of SABR to treat cancer in the lung, liver, spine, and prostate.

UT Southwestern’s Harold C. Simmons Comprehensive Cancer Center is the only National Cancer Institute-designated cancer center in North Texas and one of just 68 NCI-designated cancer centers in the nation. The Simmons Cancer Center includes 13 major cancer care programs with a focus on treating the whole individual with innovative treatments, while fostering groundbreaking research that has the potential to improve patient care and prevention of cancer worldwide. In addition, the Center’s education and training programs support and develop the next generation of cancer researchers and clinicians.

UT Southwestern, one of the premier academic medical centers in the nation, integrates pioneering biomedical research with exceptional clinical care and education. The institution’s faculty includes many distinguished members, including six who have been awarded Nobel Prizes since 1985. Numbering approximately 2,800, the faculty is responsible for groundbreaking medical advances and is committed to translating science-driven research quickly to new clinical treatments. UT Southwestern physicians provide medical care in 40 specialties to about 92,000 hospitalized patients and oversee approximately 2.1 million outpatient visits a year.