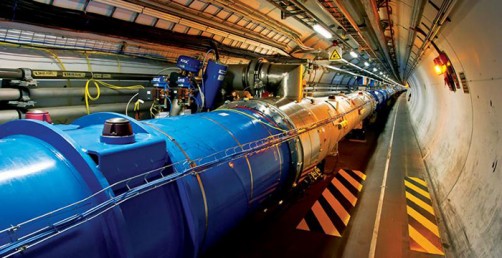 Newswise — LAWRENCE — In December of last year, scientists at the Large Hadron Collider in Europe announced startling results hinting at the existence of an undiscovered subatomic particle — one with a mass six times heavier than the Higgs boson, the particle that made headlines in 2012.

The evidence is still thin, but if more data confirm the finding it could sharpen humankind’s understanding of the building blocks of the universe.

“This was a very surprising announcement and a puzzle at the same time, because the lifetime and mass of the particle could reveal something else beyond simply one extra particle, if it turns out to be a real signal,” said Kyoungchul “K.C.” Kong, associate professor of physics and astronomy at the University of Kansas. “Yet we do not claim this as a discovery, and we need more data.”

Based on the LHC findings, theoretical physicists around the world rushed to offer ideas that could explain the mystery signal and guide further experimentation. Physical Review Letters, the leading peer-reviewed journal in the field, received hundreds of papers purporting to illuminate the LHC results.

“We explore ideas,” Kong said of theoretical particle physicists. “Probably most of ideas are wrong — but we learn from them, and we propose better ideas.”

Of the mountain of papers tendered to Physical Review Letters about the LHC findings, the journal chose to publish only four — including one co-authored by Kong, who had the original idea behind the submission.

The KU physicist said the enigmatic signal, detected at 750 giga-electron volts, or GeV, suggests “the first hint for new particles beyond the Standard Model.” (The Standard Model of particle physics is a longstanding theory used to explain the forces and subatomic particles working in atoms that constitute all known matter in the universe.)

He said, "Every explanation of the 750 GeV excess needs a new particle. Most models assume one around 750 GeV.”

But Kong’s idea is different than most. Rather than basing his theory on the existence of a “resonance” particle with a straightforwardly corresponding mass to trigger the 750 GeV signal, Kong’s paper proposes a sequence of particles at different masses, without one at 750 GeV.

“I was participating in a workshop in Korea, back in December 2015, when there was an announcement on this excess,” Kong said. “Everyone was considering a resonance particle, which would have been my first choice. I wanted to interpret this differently and talked to some friends in the workshop, and proposed non-resonance interpretation.”

The KU physicist said his concept depends upon a “sequential cascade decay” of a heavier particle into photons that can “fake the resonance signal” at 750 GeV.

Whether he is proven correct remains to be seen, but the promotion of his bold idea in the respected journal is extraordinary to colleagues at KU.

“Fundamental physics discoveries often take years, decades (see under Higgs) or even centuries (see under gravitational waves) to be confirmed,” said Hume Feldman, professor and chair of the KU Department of Physics and Astronomy. “However, it is certainly a great honor for KU to have our research published in such a high-impact venue and chosen out of literally hundreds of entries from all over the world and from the most prestigious institutes in the world.”

Another paper that proposes a different mechanism to explain the observation was written by KU Foundation Professor Christophe Royon and subsequently accepted by PRL. Assistant Professor Ian Lewis also has written a paper on the subject.

“The fact that independent KU papers were accepted by PRL out of the hundreds submitted is another testament to the high-quality research done at the Department of Physics and Astronomy,” Feldman said.

Kong’s co-authors were Won Sang Cho, Myeonghun Park and Sung Hak Lim of the Institute for Basic Science in Korea; Doojin Kim and Konstantin T. Matchev of the University of Florida; and Jong-Chul Park of Korea’s Chungnam National University.

Currently, Kong is attending a workshop at CERN, the European nuclear agency that operates the LHC. There, his work on the puzzling results will continue.

“Theorists propose ideas, and experimentalists perform experiments to test the ideas, then publish their results — and we try to understand,” he said.

Other KU faculty working at the LHC include KU's Distinguished Professor Alice Bean and professors Graham Wilson and Philip Baringer, as well as students and postdoctoral researchers.

An update on the 750 GeV excess will be presented at a conference in Chicago next week, Aug. 3-10.