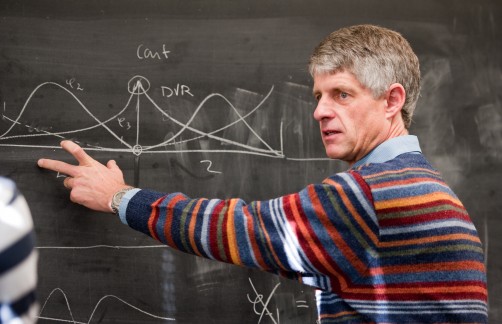 Uwe Thumm, professor of physics, has received the international Humboldt Research Award for his lifetime achievements in research.

Newswise — MANHATTAN, KANSAS — A Kansas State University physics professor has been chosen as one of the 100 researchers internationally to receive the prestigious Humboldt Research Award this year.

Uwe Thumm, professor of physics, is receiving the award for his lifetime research achievements in atomic, molecular and optical physics.

"This award is a great opportunity to continue collaborations, to start new ones and to interact with leading scientists in Germany," Thumm said.

The Alexander von Humboldt Foundation gives the research award annually to scientists whose fundamental discoveries, new theories or insights have significantly influenced their own disciplines and who are expected to continue producing cutting-edge achievements. The award aims to increase international scientific cooperation. Award winners become lifelong members of the Alexander von Humboldt network and are invited to carry out long-term research projects with colleagues in Germany.

Thumm, a theoretical physicist who studies femtosecond and attosecond physics, will use the award to collaborate with researchers at the University of Frankfurt in Frankfurt; the Max Planck Institute for Quantum Optics in Garching; the Max Planck Institute for Nuclear Physics in Heidelberg; and the Center for Free-Electron Laser Science in Hamburg.

The Kansas State University physics department and the James R. Macdonald Laboratory have long-collaborated with German research institutions, Thumm said. He cited the example of Lew Cocke, university distinguished professor emeritus of physics, who was instrumental in beginning such international collaborations.

"It has been a very fruitful exchange that has benefited our department and the Macdonald Laboratory tremendously," Thumm said. "I am looking forward to continuing these collaborations with our German colleagues."

Reinhard Dörner, a leading German atomic physicist at Goethe University in Frankfurt, nominated Thumm for the award. Dörner and Thumm have collaborated for many years.

His research group studies femtosecond and attosecond physics and develops theoretical methods and numerical simulations to describe the atomic motion inside molecules and the ultrafast dynamics of electrons in matter with atomic time resolution. An attosecond is one-billionth of a billionth of a second.

Thumm has collaborated with numerous researchers worldwide and holds several patents. He has contributed 99 publications in peer-reviewed journals and books and 237 reports, press-releases and abstracts that stretch back more than two decades.