Tool opens door for design of new phases of materials 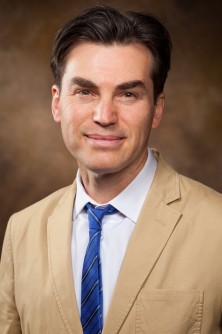 Newswise — FAYETTEVILLE, Ark. – Physicists have engineered novel magnetic and electronic phases in the ultra-thin films of in a specific electronic magnetic material, opening the door for researchers to design new classes of material for the next generation of electronic and other devices.

“Pressure is an absolutely fantastic tool to change the properties of any compound,” said Jak Chakhalian, professor of physics at the University of Arkansas. “But how do you apply pressure to something that is nanoscale? We’ve finally found a way to systematically exert ‘pressure’ on this thin nanomaterial, which has only a few atomic layers, to enable new electronic and magnetic phases.”

An article detailing the finding, “Heterointerface engineered electronic and magnetic phases of NdNiO3 thin films,” was published Nov. 6 in Nature Communications, an online journal published by the journal Nature.

Chakhalian and his former doctoral student Jian Liu found a way to apply pressure to the magnetic material by varying the distances between atoms with a crystal lattice substrate. The compression forced the material into new phases, with intriguing properties not attainable in the larger crystals. Thus, the physicists developed a tool that allows them to control and engineer the novel behavior of the nanomaterial on an atomic scale, Chakhalian said.

“In general, nature is remarkably scalable,” he said. “If a material is a conductor of electricity, it doesn’t matter what size it is; it will conduct electricity. The naïve expectation in the 1990s was that anything we shrunk down to nano size would act profoundly differently, and we did develop many remarkable tools that were capable of shrinking them down to hundreds, and recently, tens of nanometers. But it turned out we didn’t go far enough. As we know now, we really need to go one magnitude lower: the atomic scale. Then these things get really strange.

“In order to find out the fundamental reason for how material properties emerge, for example why a material conducts electricity or why it is magnetic, I need to go smaller and smaller,” he said.

That’s why Chakhalian and his researchers are exploring the behavior of materials at the size several angstroms per layer, a unit equal to one-hundred millions of a centimeter.

Liu, now a postdoctoral fellow at Lawrence Berkeley National Laboratory in California, was the lead researcher, and the results were part of his doctoral thesis at the U of A. Benjamin A. Gray, a doctoral student, prepared and characterized the samples and performed measurements.

Chakhalian holds the Charles E. and Clydene Scharlau Endowed Professorship and directs the Laboratory for Artificial Quantum Materials at the University of Arkansas.

The results were obtained through a collaborative effort with Mehdi Kargarian and Gregory A. Fiete of the University of Texas at Austin, James M. Rondinelli at Drexel University in Philadelphia, Phil J. Ryan and John W. Freeland of the Advanced Photon Source at Argonne National Lab outside Chicago; and Alejandro Cruz, Nadeem Tahir, Yi-De Chuang and Jinghua Guo of the Advanced Light Source at Lawrence Berkeley National Laboratory.