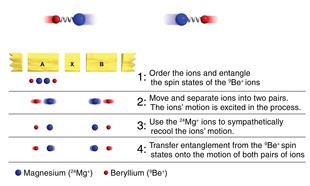 How to Entangle Two Mechanical Oscillators

Newswise — Physicists at the National Institute of Standards and Technology (NIST) have demonstrated entanglement—a phenomenon peculiar to the atomic-scale quantum world—in a mechanical system similar to those in the macroscopic everyday world. The work extends the boundaries of the arena where quantum behavior can be observed and shows how laboratory technology might be scaled up to build a functional quantum computer.

The research, described in the June 4 issue of Nature,* involves a bizarre intertwining between two pairs of vibrating ions (charged atoms) such that the pairs vibrate in unison, even when separated in space. Each pair of ions behaves like two balls connected by a spring (see figure), vibrating back and forth in opposite directions. Familiar objects that vibrate this way include pendulums and violin strings.

The NIST achievement provides insights into where and how "classical" objects may exhibit unusual quantum behavior. The demonstration also showcased techniques that will help scale up trapped-ion technology to potentially build ultra-powerful computers relying on the rules of quantum physics. If they can be built, quantum computers may be able to solve certain problems, such as code breaking, exponentially faster than today's computers. (For further details, see: www.nist.gov/public_affairs/quantum/quantum_info_index.html.)

"Where the boundary is between the quantum and classical worlds, no one really knows," says NIST guest researcher John Jost, a graduate student at the University of Colorado at Boulder and first author of the paper. "Maybe we can help answer the question by finding out what types of things can—and cannot be—entangled. We've entangled something that has never been entangled before, and it's the kind of physical, oscillating system you see in the classical world, just much smaller."

Mechanical oscillators like two pendulum-based clocks have previously been synchronized, but their vibrations can still be independent, so that changes in one have no effect on the other. Quantum entanglement—"spooky action at a distance," in Einstein's words—is a far more counterintuitive process: If two objects are entangled, then manipulating one instantaneously affects the other, no matter how far away it is. Entangled objects do not necessarily have identical properties, just properties that are linked in predictable ways.

Jost and colleagues entangled the vibrational motions of two separated mechanical oscillators, each consisting of one beryllium and one magnesium ion. Each pair behaves like two objects connected by a spring 4 micrometers (millionths of a meter) long, with the beryllium and magnesium moving back and forth in opposite directions, first toward each other, then away, then back again. The two pairs perform this motion in unison, even though they are 240 micrometers apart and are located in different zones of an ion trap. The scientists created the desired entangled state at least 57 percent of the time they tried, and have identified ways to improve the success rate.

The NIST experiments suggest that mechanical oscillators can take part in both the quantum and classical worlds, possessing some features of each, depending in part on the energy and other properties of the vibrations. The experiments also achieved the first combined demonstration of arranging different ions into a desired order, separating and re-cooling them while preserving entanglement, and then performing subsequent quantum operations on the ions. These techniques could help scientists build large-scale quantum computers that use hundreds of ions to store data and perform many computational steps. The same NIST group has previously demonstrated the basic building blocks of a quantum computer using ion traps, as well as rudimentary logic operations.

To entangle the motion of the two oscillators, the NIST group first placed four ions together in one trap zone in a particular linear order (Be-Mg-Mg-Be), and entangled the internal energy states of the two beryllium ions. The team then separated the four ions into two pairs, with each pair containing one of the entangled ions. Finally, the scientists transferred the entanglement from the beryllium ions' internal states to the oscillating motions of the separated ion pairs.

The research was funded in part by the Intelligence Advanced Research Projects Activity. The authors include former NIST post-doctoral scholars who are currently at the Weizmann Institute of Science in Israel and Lockheed Martin of Littleton, Colo.

NIST physicists entangled two vibrating mechanical systems each consisting of one beryllium and one magnesium ion, in an experiment that required 14 milliseconds, including verification of results, and involved about 600 laser pulses. The steps below expand on information provided in the figure.

Step 1—Initially, all four ions are placed in the same zone of an ion trap and cooled with lasers to very low temperatures. By tuning the voltages of the trap electrodes scientists arrange the ions in a particular order, with both heavier magnesium ions between the beryllium ions. Using a technique developed for quantum computing several years ago, scientists entangle the two beryllium ions' internal "spin states," which are analogous to tiny bar magnets pointing up or down. Two ultraviolet laser beams, positioned at right angles, cause the ions to oscillate. The lasers are tuned so the difference between their frequencies is very close to the frequency of one of the ions' natural vibrations, the rate at which it likes to oscillate back and forth. Based on differences in their spins, the ions "feel" a differing laser force that causes the ions to oscillate in a particular way. This coupling of the spin states to motion has the global effect of entangling the spins of the beryllium ions in a controlled way.

Step 2—Voltages are then applied to electrode X to separate the ions into two pairs, which are distributed to different trap zones located adjacent to electrodes A and B. The separation and transport boost the energy of motion in the oscillating ions.

Step 3—The magnesium ions are cooled with lasers to remove excess motional energy from the beryllium ions, a process called sympathetic cooling because one type of ion cools the other. This is the first time entangled ions have been re-cooled prior to further operations, a technique expected to be useful in computing.

Step 4—By manipulating laser beam colors and orientations in a sequence of pulses of specific intensity and duration, scientists transfer the entanglement from the beryllium spins to the motion. The two mechanical oscillators are now entangled. Under ideal conditions, the beryllium and magnesium ions are oscillating back and forth in opposite directions, toward each other and then away. The two pairs perform this motion in unison, even though they are 240 micrometers apart and are located in different zones of the trap.

Scientists are not able to measure the entangled motions directly. Instead, to verify the results, they conduct a cleanup procedure partway through the experiment to ensure the entanglement has been transferred successfully from the ions' spin to their mechanical motion. Then, at the end of the experiment, they essentially reverse the entire process to transfer the entanglement from the ion motion back to the spins, to reproduce the initial beryllium spin states, which they can measure through the light scattered by the beryllium ions (spin up scatters laser light, whereas spin down does not).