Physics at The "Precision Frontier" Gets $8M Boost From New Partnership

28-Apr-2016 9:05 AM EDT, by Perimeter Institute for Theoretical Physics
favorite_border 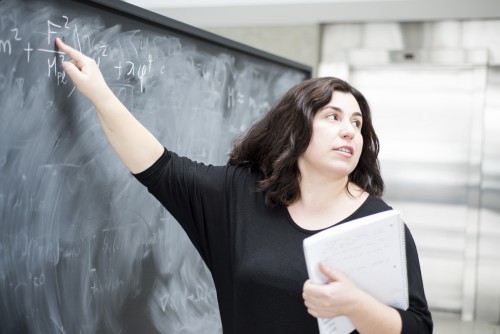 “Asimina is an exceptional physicist,” says Neil Turok, Perimeter Institute’s Director. “Her ideas bridge theory and experiment in new and creative ways. Hers is a rare talent, needed now more than ever, when the field is on the threshold of revolutionary advances. Thanks to this new investment from the Stavros Niarchos Foundation, Asimina will have opportunities to pursue breakthrough discoveries.”

Arvanitaki joined Perimeter Institute in 2014, after earning an undergraduate degree from the University of Athens and a graduate degree from Stanford University. Before starting at Perimeter, she was a research associate at the Stanford Institute for Theoretical Physics. Arvanitaki has described her research as broad and interdisciplinary, testing theories that are beyond the Standard Model, including supersymmetry, dark matter, and extra dimensions.

"The Stavros Niarchos Foundation has given us the opportunity to pursue some of the big questions in physics, and we will do our best to help find the answers," says Arvanitaki, who becomes the first woman to hold a research chair at Perimeter. "This will also help us strengthen research and training ties to Greece, where there is a lot of untapped potential. I am proud to be recognized by an organization that has contributed so much to Greece and the world."

While much of the field of particle physics is concerned with the “high-energy frontier,” which requires huge colliders to smash particles, Arvanitaki’s research focuses on tests at the so-called “precision frontier.” These tests seek to probe new physics with high-precision measurements that reveal tiny deviations using experiments that are, in some cases, small enough to fit on a table top.

Using technologies and techniques from other fields of physics, Arvanitaki designs novel experiments that can provide insights into the nature of dark matter, particle interactions, and other deep questions. The new investment will enable collaboration between Arvanitaki and her research colleagues, the hiring of a research team, and more.

“Asimina’s work is on the cutting edge of scientific research and carries profound implications for us all,” said Eva Polyzogopoulou, Coordinator of the Education program area at the Stavros Niarchos Foundation. “As a Foundation, we recognize the importance of pure research and the need to support it. But Asimina’s work is also significant in ways that transcend science and research. As a young scientist, she will be a great inspiration to the youth in her native Greece, who are pursuing their dreams amidst the current crisis. Furthermore, Asimina’s appointment is a manifestation of one of Perimeter’s most defining characteristics, namely its commitment towards attracting young scientists just entering their peak years of research productivity, and providing them with the proper environment and resources that would allow them to flourish and make new and innovative scientific contributions.”

The Chair is named after Aristarchus, an ancient Greek mathematician and astronomer who proposed the first-known model placing the sun at the center of the solar system.

For more information, read the article appearing on Perimeter’s website (to be live by 2pm EDT on April 28): http://www.perimeterinstitute.ca/node/99742

ABOUT THE STAVROS NIARCHOS FOUNDATIONThe Stavros Niarchos Foundation (www.SNF.org) is one of the world’s leading private international philanthropic organizations, making grants in the areas of arts and culture, education, health and sports, and social welfare. The Foundation funds organizations and projects that are expected to achieve a broad, lasting and positive impact for society at large, focusing on vulnerable groups such as children and the elderly, and also exhibit strong leadership and sound management. The Foundation also seeks actively to support projects that facilitate the formation of public-private partnerships as an effective means for serving public welfare.

ABOUT PERIMETER INSTITUTEPerimeter Institute is the world’s largest research hub devoted to theoretical physics. The independent Institute was founded in 1999 to foster breakthroughs in the fundamental understanding of our universe, from the smallest particles to the entire cosmos. Research at Perimeter is motivated by the understanding that fundamental science advances human knowledge and catalyzes innovation, and that today’s theoretical physics is tomorrow’s technology. Located in the Region of Waterloo, the not-for-profit Institute is a unique public-private endeavour, including the Governments of Ontario and Canada, that enables cutting-edge research, trains the next generation of scientific pioneers, and shares the power of physics through award-winning educational outreach and public engagement.