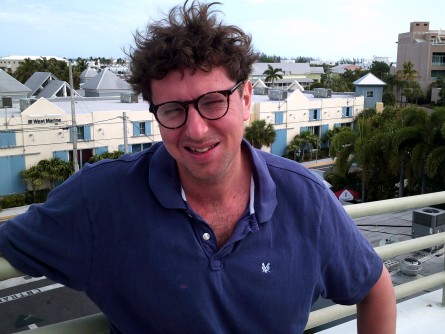 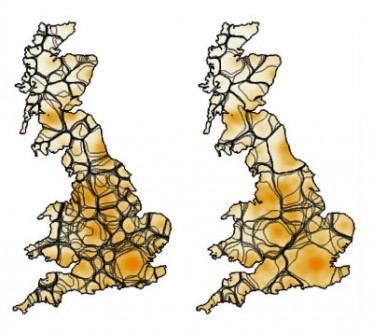 Each black line is an ‘isogloss’ generated by Burridge’s model. An isogloss is a line which separates regions where one pronunciation dominates from a region where another dominates (an example pronunciation could be how people pronounce the ‘a’ in bath). If a traveller travelled over a zone where many isoglosses had bundled together (such as the ‘North-south’ bundle that connects the Bristol Channel to The Wash shown here) they would experience a sharp/noticeable transition between dialect. Whereas when the lines are more spread out, or messy, the traveller might hear more of a gradual dialect change. The darker orange colours represent higher population density. In the right hand plot people have greater mobility - they regularly travel 10km or more around their home. In the left hand plot they only travel about 5km. 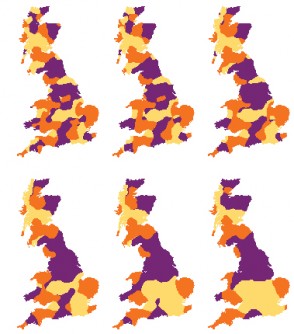 These maps show a simulation of three language variants that are initially distributed throughout Great Britain in a random pattern. As time passes (left to right), the boundaries between language variants tend to shorten in length. One can also see evidence of boundary lines fixing to river inlets and other coastal indentations.

Newswise — Language patterns could be predicted by simple laws of physics, a new study has found.

Dr James Burridge from the University of Portsmouth has published a theory using ideas from physics to predict where and how dialects occur.

He said: “If you want to know where you’ll find dialects and why, a lot can be predicted from the physics of bubbles and our tendency to copy others around us.

“The bubbles in the bath are like groups of people – they merge into the bigger bubbles because they want to fit in with their neighbours.

“When people speak and listen to each other, they have a tendency to conform to the patterns of speech they hear others using, and therefore align their dialects. Since people typically remain geographically local in their everyday lives, they tend to align with those nearby.”

Dr Burridge from the University’s department of mathematics departs from the existing approaches in studying dialects to formulate a theory of how country shape and population distribution play an important role in how dialect regions evolve.

Traditional dialectologists use the term ‘isogloss’ to describe a line on a map marking an area which has a distinct linguistic feature.

Dr Burridge said: “These isoglosses are like the edges of bubbles – the maths used to describe bubbles can also describe dialects.

“My model shows that dialects tend to move outwards from population centres, which explains why cities have their own dialects. Big cities like London and Birmingham are pushing on the walls of their own bubbles.

“This is why many dialects have a big city at their heart – the bigger the city, the greater this effect. It’s also why new ways of speaking often spread outwards from a large urban centre.

“If people live near a town or city, we assume they experience more frequent interactions with people from the city than with those living outside it, simply because there are more city dwellers to interact with.

His model also shows that language boundaries get smoother and straighter over time, which stabilises dialects.

Dr Burridge’s research is driven by a long-held interest in spatial patterns and the idea that humans and animal behaviour can evolve predictably. His research has been funded by the Leverhulme Trust.