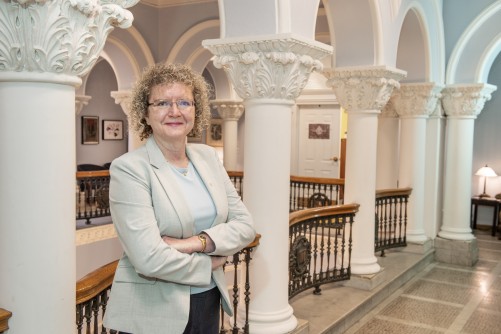 WVU's Gay Stewart is the 2018 recipient of the prestigious Hans Christian Oersted Medal from the American Association of Physics Teachers.

Gay Stewart, Eberly Distinguished Professor of Science, Technology, Engineering and Math Education in the Physics and Astronomy Department of the Eberly College of Arts and Sciences and director of the West Virginia University Center for Excellence in STEM Education, is being recognized with the annual award, established in 1936, which recognizes an individual who has had an outstanding, widespread and lasting impact on the teaching of physics.

Stewart has dedicated her career to the advancement of physics and STEM education, serving on the AAPT’s executive board from 2011-2015 and the American Physical Society’s Executive Board, Council of Representatives and Forum on Education.

“Gay Stewart is a visionary educator, whose commitment to improving the teaching of science benefits WVU students at all levels. But her positive impact on the field does not stop there. Through her identification and training of other gifted teachers and her deep engagement with the public education system, Gay has truly transformed science education throughout her career,” said Provost Joyce McConnell. “We are so proud that the AAPT has recognized her work with the Oersted Medal.”

In the physics community, Stewart is known for co-directing one of the first Physics Teacher Education Coalition-supported sites at the University of Arkansas, leading to a remarkable rise in the number of certified K-12 physics teachers graduating from the institution. She implemented a UTeach replication program for STEM teachers there, and at WVU through the WVUteach program, which graduated its first cohort in May 2018.

Throughout her career, Stewart has been awarded millions of dollars in funding from the National Science Foundation and the Howard Hughes Medical Institute for programs contributing to STEM education, research, curriculum and development, and also serving as principal investigator or co-principal investigator on several NSF Noyce Scholarship grants that provide resources and professional development for future teachers.

“This well-deserved recognition from the American Association of Physics Teachers reflects a career of commitment on the part of Professor Stewart,” said WVU’s Vice President for Research Fred King. “Professor Stewart is known internationally as a thought leader not only in physics education, but in STEM education broadly.  The University is fortunate that she is leading our efforts on this front through the WVU Center for Excellence in STEM Education.”

At the WVU STEM Center, Stewart leads a variety of programs and initiatives dedicated to improving STEM education in the state of West Virginia at all levels. Through programs like Mountaineer Mathematics Master Teachers, CodeWV, STEMx and more, Stewart’s approach aims to provide resources and development opportunities for teachers as well as to expand programming and outreach to students.

Stewart will be publicly presented with the Oersted medal at a ceremonial session of the 2019 AAPT Winter Meeting in Houston Texas.