Prize to be given to Imperial College artist for her innovative expressions of scientific processes in recognizing the cultural, artistic and humanistic dimension of physics 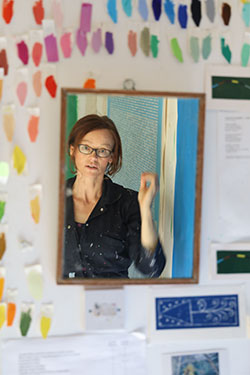 Newswise — WASHINGTON, D.C., August 19, 2020 -- The American Institute of Physics announced artist Geraldine Cox has been selected as the winner of the 2020 Andrew Gemant Award.

Named after the renowned physicist, the Andrew Gemant Award is given by AIP annually to recognize individuals who have made significant contributions to the cultural, artistic or humanistic dimension of physics.

In selecting Cox, the selection committee cited her “for articulating deep physics concepts through visual arts and other media, reaching a remarkable range of people in innovative ways and sharing her passion for the expression of physical truths.”

“When you finish a fine art degree, it’s important to ask what you want to make art about. That can be a question you can spend years figuring out,” Cox said. “I came tentatively to the conclusion that I wanted to make work that celebrated our ability to observe, imagine and appreciate the world.”

"We are delighted to award this year’s Gemant Award to Geraldine Cox,” said AIP CEO Michael Moloney. “With her ability to depict complex scientific concepts through a variety of artistic media, Cox has helped people of all ages and backgrounds engage with the physical sciences.”

Following a break from the sciences after earning her bachelor of science degree in physics from Loughborough University, Cox went on to study fine art at the City and Guilds of London Art School.

After connecting with Imperial College London quantum physics professor Terry Rudolph, the two applied for an Artist in Residence grant through the Leverhulme Trust, which fosters interdisciplinary collaboration. They received the grant in 2011, and Cox has been the artist in residence at Imperial College since then, working closely with scientists there as well as at other British and American universities. The grant project has evolved to encompass a range of media including the visual and performing arts.

“Reading Geraldine Cox’s CV is as rewarding as spending an afternoon in an art museum suffused with the essence of science -- were we to be so lucky as to have such an institution,” said David Helfand, chair of AIP’s board of directors. “From her work with students to her collaborations with physicists, she perfectly matches the principal criterion of the Gemant Award, which is to connect the sometimes arcane world of physics to the artistic and humanistic culture accessible to all of humankind.”

“Every project begins with a desire to understand something more deeply. We look for new ways of talking and thinking about a concept and from an artistic point of view, entirely new representations can come out,” she said.

Cox hosts workshops for everyone, from children, their families, teachers and local communities to artists and scientists. The workshops celebrate the knowledge of physics, and participants express their ideas through art. Activities include creating giant collages that explore the makeup of sunlight, building mobiles about atoms and dancing to reveal the subtle processes that color the world.

During the pandemic, her interactive work has moved online, and she has developed new workshop formats for children. She is also taking the opportunity to spend more time working on a series of large oil paintings of interference patterns with tens of thousands of elements. She is also recording five-minute audio “Thoughtcasts” designed to help the imagination journey through the topic of light.

Cox considers each project to be an experiment, drawing inspiration from the scientific method to ensure her work asks the right questions. Some of her work is about science itself -- for example, accurately describing a complex scientific project through drawing.

“While scientists are discovering new things, I think there is a whole world of work to find new ways to express what we know. We can never directly experience many of the landscapes that science explores. They are too distant, too tiny, too ancient or too hot, for example. Yet they are beautiful and inspiring territory for the human imagination and art,” Cox said. “I’m also interested in sharing the scientific mindset. Maybe if it was more widely embraced and understood, we’d have a better world.”

Rudolph first nominated Cox for the award in 2016, so the notice in 2020 came out of the blue.

“I’m really happy and hope it means that the project can continue in a more effective way. We can do more work and reach more minds,” she said.

“Everything in this project has been achieved with incredible support from scientist colleagues over the years. I’m hugely grateful that they joined the experiment to discover new ways of imagining and sharing some of the beautiful things we know.”

More information about Cox’s work can be found at www.findingpatterns.info.

ABOUT THE ANDREW GEMANT AWARD

The Andrew Gemant Award recognizes the accomplishments of a person who has made significant contributions to the cultural, artistic, or humanistic dimension of physics and is given annually. The award is made possible by a bequest of Andrew Gemant to the American Institute of Physics. The awardee receives a $5,000 cash award, designates an academic institution to receive a grant of $3,000 to further the public communication of physics, and is invited to deliver a public lecture in a suitable forum. See https://www.aip.org/aip/awards/gemant-award.

The American Institute of Physics (AIP) is a 501(c)(3) membership corporation of scientific societies. AIP pursues its mission—to advance, promote, and serve the physical sciences for the benefit of humanity—with a unifying voice of strength from diversity. In its role as a federation, AIP advances the success of its Member Societies by providing the means to pool, coordinate, and leverage their diverse expertise and contributions in pursuit of a shared goal of advancing the physical sciences in the research enterprise, in the economy, in education, and in society. In its role as an institute, AIP operates as a center of excellence using policy analysis, social science, and historical research to promote future progress in the physical sciences. See http://www.aip.org.