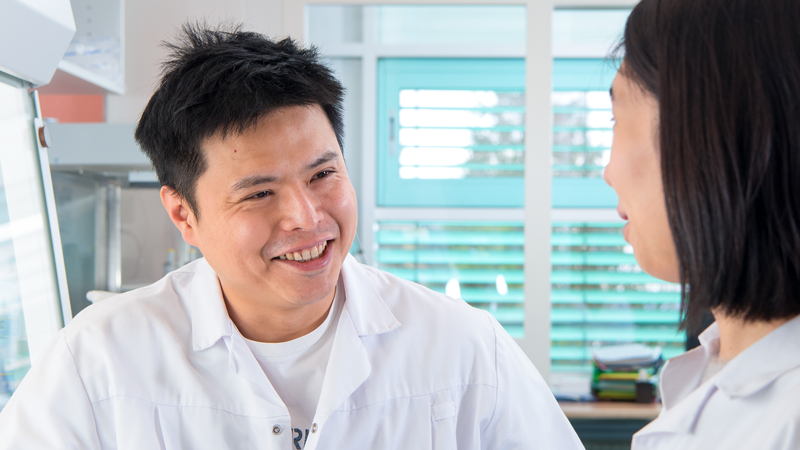 Ping-Chih Ho, Associate Member at the Lausanne Branch of the Ludwig Institute for Cancer Research

JANUARY 9, 2020, New York— Ludwig Cancer Research congratulates Ping-Chih Ho on his appointment as Associate Member at the Lausanne Branch of the Ludwig Institute for Cancer Research. Ho and his team at Ludwig Lausanne will continue their highly productive exploration of how the metabolic activity and nutritional intake of cancer cells influence the immune response against tumors, and how these effects might be exploited for cancer therapy.

“Ping-Chih has already made fascinating discoveries about how the metabolic microenvironment of tumors disables distinct elements of the anti-tumor immune response and has identified strategies to disable those defenses,” said Ludwig Lausanne Director George Coukos. “We believe his studies will yield more discoveries with significant translational potential that are likely to be of high value to Ludwig Lausanne’s efforts to advance cancer immunotherapy.”

While still a postdoctoral researcher in the laboratory of Susan Kaech, then at Yale University, Ho discovered how the cancer cell’s excessive consumption of the sugar glucose incapacitates the immune system’s T cells within tumors, suppressing anti-tumor immunity and creating a permissive environment for cancer progression.

Ho’s own laboratory at Ludwig Lausanne has since become an engine of discovery in the burgeoning field of immunometabolism. His team reported in 2017 in Nature Immunology that relative levels of two metabolites derived from the amino acid glutamine can have a profound effect on immune cells known as macrophages, determining whether the cells take a form that attacks tumors or one that supports tumor growth. This suggests that the classical biochemical pathways involved in producing these metabolites might be pharmacologically tweaked for immunotherapy.

More recently, Ho and his colleagues reported in another Nature Immunology study that melanoma tumors expressing a metabolic enzyme known as UCP2 draw key anti-tumor immune cells into their microenvironment and are therefore more susceptible to checkpoint blockade immunotherapies. They also reported that an existing diabetes drug can induce the production of UCP2 in tumors that fail to express the enzyme and are therefore resistant to checkpoint blockade.

Ho was appointed Associate Professor at the University of Lausanne in 2019 and, in 2018, received the Swiss Bridge Award and a European Research Council starting grant to support his work on immunotherapy and in recognition of his contributions to immunometabolomics. He also received the Cancer Research Institute-CLIP investigator award in 2017 and 2019, and was named an EMBO Young Investigator in 2019.

“The generous support provided by Ludwig Cancer Research and access to its top-tier research community are major assets to my research program,” said Ho. “The complex metabolic crosstalk in the tumor microenvironment is a significant barrier to effective cancer immunotherapy. Exploring its dynamics and finding solutions to the problems it poses requires a willingness to take risks. Fortunately, Ludwig has a history of supporting this kind of scientific research. My team and I are grateful for that continuing support and confident that it will yield results that will ultimately be of great benefit to cancer patients.”

Ludwig Cancer Research is an international collaborative network of acclaimed scientists that has pioneered cancer research and landmark discovery for 48 years. Ludwig combines basic science with the ability to translate its discoveries and conduct clinical trials to accelerate the development of new cancer diagnostics and therapies. Since 1971, Ludwig has invested $2.7 billion in life-changing science through the not-for-profit Ludwig Institute for Cancer Research and the six U.S.-based Ludwig Centers. To learn more, visit www.ludwigcancerresearch.org.