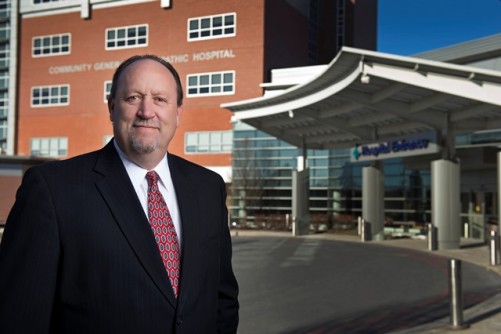 Guarneschelli has been with PinnacleHealth for more than 30 years. His extensive senior executive experience includes his service as interim president and CEO of PinnacleHealth from March 2010 through June 2011. His experience also includes operations management, strategic planning, contracting, finance, physician relations, and real estate and construction management.

“Phil has the full confidence of the board, and he will continue as an exceptional leader in this new role,” says Steve Kusic, chairperson, PinnacleHealth System Board of Directors. “Phil has forged strong bonds within the PinnacleHealth family in part because of his commitment to team building, as well as his good humor and positive outlook.”

Among his accomplishments, Guarneschelli oversaw much of the system’s consolidation and modernization project at Polyclinic, Harrisburg and Community General Osteopathic Hospitals, Fredricksen Outpatient Center, The Helen M. Simpson Rehab Hospital, Spine Center and the PinnacleHealth Cancer Center. More recently, he led the leadership team for construction of the West Shore Hospital and the Ortenzio Cancer Center.

“Phil is a rare leader who is also a people person. If it will support someone in need or a good cause, you’ll find Phil flipping burgers or plowing snow—whatever he can do,” adds Kusic. “Yet he has the business savvy required to further our vision of providing exceptional care to the community with a focus on improving quality and safety, promoting fiscally responsible growth, and maintaining financial strength.”

Guarneschelli was recently recognized by the Central Penn Business Journal with the 2016 Executive Management Award in the Chief Operating Officer category.

Guarneschelli obtained his MBA from Saint Francis DeSales University. He previously attended the Indiana University of Pennsylvania and obtained a Bachelor of Science in business administration. He is a member of the American College of Healthcare Executives (ACHE).

Guarneschelli has been a Harrisburg area resident more than 50 years and is committed to the central Pennsylvania community. He served as past president for both the local chapter of the Exchange Club and the International Facilities Management Association (IFMA). He served on the board of directors for the Keystone Area Council Boy Scouts of America, Harrisburg Regional Chamber, Leukemia & Lymphoma Society and United Way of the Capital Region. In addition, Guarneschelli served as chairman for the 2009 and 2011 American Heart Walks.