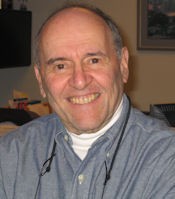 Ronald Dubner, PhD, DDS, of the University of Maryland School of Dentistry

Newswise — Ronald Dubner, PhD, DDS, of the University of Maryland School of Dentistry was honored today with the 2012 Distinguished Scientist Award by the American Association for Dental Research (AADR).

The AADR presents the award every two years to a scientist in any field of oral sciences for contributing outstanding research of particular significance.

Dubner is a professor in the School’s Department of Neural and Pain Sciences, who is “an internationally-regarded pain scientist with a remarkable record of research, teaching and mentoring, service and administrative leadership,” states the AADR announcement.

One of Dubner’s best known achievements was to establish an outstanding intramural pain program in the Neurobiology & Anesthesiology Branch of the National Institutes of Health’s institute, now known as the National Institute of Dental and Craniofacial Research, a program which is one of the pre-eminent interdisciplinary pain research programs in the world.

Christian S. Stohler, DMD, DrMedDent, dean of the University of Maryland School of Dentistry, says throughout Dubner’s career he has explored key questions at the forefront of pain science “at all levels of inquiry,” including his recent focus on the interactions between the immune and nervous systems regarding pain, which was published in the journal Nature Medicine.

“Dr. Dubner has an exceptionally distinguished scientific and professional career that is exemplified by being the recipient of no less than 46 awards and recognitions,” says Stohler. “Ron’s strongest suit, however, is his influence on his students, post-docs, faculty, and collaborators. He has touched hundreds of pain researchers in his career with many owing their career to the training and guidance that they received from him.”

“AADR is pleased to present Dr. Dubner with the 2012 Distinguished Scientist Award,” says AADR President Jeffrey Ebersole. “Dubner’s contributions to the understanding of the neurobiological mechanisms of orofacial acute and chronic pain and the ability to translate these findings to improve health care have been tremendous, and he is uniquely qualified for this award.”

The AADR announcement further states, “With training in dentistry that was augmented with graduate training in neurophysiology, [Dubner’s] contributions to the understanding of how the nervous system processes and encodes information about acute and persistent pain are significant.”

Sixteen years after joining the School of Dentistry, Dubner remains excited about pain research. New advances like brain imaging and molecular techniques provide more precise tools. Dubner strives to be a leader in the field by utilizing the latest technology. He finds his research rewarding because he can see the results in the clinic. "Research is about discovering the unknown. Ultimately, it's about taking this knowledge and helping people have a better quality of life," he says.

The AADR award is supported by GlaxoSmithKline.

The AADR is a nonprofit group based in Alexandria, Va., with nearly 4,000 members in the United State and is the largest division of the International Association for Dental Research.