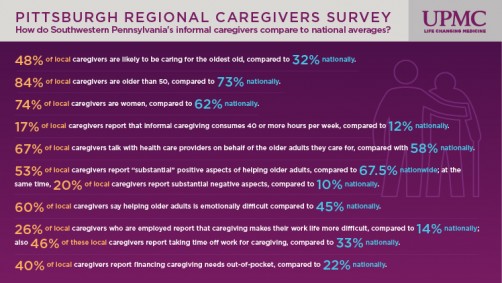 Some results from the Pittsburgh Regional Caregivers Survey

Newswise — PITTSBURGH, Dec. 6, 2017 – Southwestern Pennsylvania far exceeds national averages for telltale signs of the stress and risk faced by family caregivers, according to a large survey conducted by the University Center for Social and Urban Research (UCSUR) and the Health Policy Institute’s Stern Center for Evidence-Based Policy at the University of Pittsburgh.

Results from the Pittsburgh Regional Caregivers Survey, released today, paint the most comprehensive picture to date of the caregiving landscape in the Pittsburgh region, which has one of the nation’s oldest populations.

“Our report is raising an alarm because most of the findings show that caregiving here is much more intense than in other parts of the country,” said Scott Beach, Ph.D., interim director of UCSUR. “Our region has more ‘oldest old’ adults – those who are older than 85 years – than in the U.S. as a whole, and the people who provide informal care to them also are older than the national average for caregivers. Their caregiving duties are having more of an impact on their careers, they are spending more out-of-pocket money, and they report more negative aspects of being a caregiver.”

The survey is part of The Caregiver Project, a two-year, $1 million initiative, funded by the Stern Family Foundation and The Emily Kelly Roseburgh Memorial Fund of The Pittsburgh Foundation. The project was in response to “Families Caring for an Aging America,” a landmark National Academies of Sciences, Engineering, and Medicine report chaired by Richard Schulz, Ph.D., Pitt professor of psychiatry. The report called for a transformation in the policies and practices affecting the role of families in the support and care of older adults.

Between February and July of this year, more than 1,000 caregivers from Allegheny, Armstrong, Butler, Beaver, Fayette, Washington and Westmoreland counties participated in the 45-minute survey.

In reviewing the results, two unique groups of caregivers emerged: one that is in need of immediate help, which typically consisted of older, female spouses with a lower income caring for an older adult with more needs; and those new to their caregiving role who were primarily younger, more educated adults.

“While these groups are quite different, we believe they are both ideal targets for policy and practice interventions that address the needs of our most at-risk caregivers,” said Everette James, J.D., M.B.A., director of Pitt’s Health Policy Institute. “This survey is further evidence that the time has come for a concerted effort to improve caregiver policy at local, state and federal levels.”

The team believes that such a policy would need to include four key components: