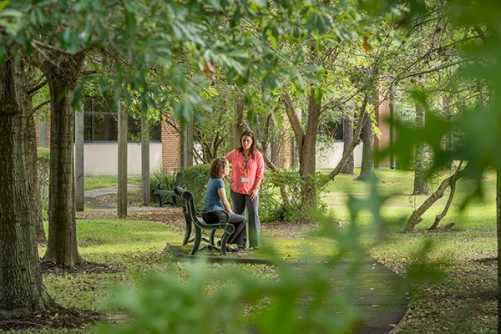 The park-like green space at UTHealth Harris County Psychiatric Center will be shared by patients and staff as part of the new UTHealth Continuum of Care Campus for Behavioral Health.

Newswise — HOUSTON – (Jan. 8, 2018) – With the first $6 million in state funds approved by the Legislative Budget Board and the Governor to the Texas Health and Human Services Commission (HHSC) for the construction of a psychiatric hospital in Houston, The University of Texas Health Science Center at Houston (UTHealth) will oversee construction of a continuum of care campus for behavioral health that addresses a critical need in Texas.

The UTHealth Continuum of Care Campus for Behavioral Health is planned to include acute, subacute, and residential treatment and is estimated to cost $125 million. With up to a projected additional 300 beds, combined with the 274 existing acute care beds in the UTHealth Harris County Psychiatric Center, this facility would create the largest academic behavioral health hospital in the country.

During the 85th Legislative Session, the Texas Legislature approved $300 million to expand and significantly repair the state's hospital system during the 2018-2019 biennium, with the intent to appropriate more funds to HHSC in the following biennia.  HHSC recommended allocating more than one-third of the funding to the UTHealth project.

“Our state leaders in the Legislature and in the Health and Human Services Commission have shown incredible dedication to help those suffering from behavioral health illnesses in Texas. UTHealth is honored to partner with them to develop innovative programs and provide the highest level of care for this vulnerable population,” said Giuseppe N. Colasurdo, M.D., UTHealth president and Alkek-Williams Distinguished Chair. “This funding is a giant step toward addressing a critical health care need.”

Many people at the Capitol and across the state were instrumental in securing these funds, including the author and sponsor of SB 1, Sen. Jane Nelson and Rep. John Zerwas, M.D., and state leaders such as Gov. Greg Abbott, Lt. Gov. Dan Patrick and House Speaker Joe Straus. Sen. Charles Schwertner, M.D., and Rep. Sarah Davis, who oversee budget negotiations for health and human service programs, led the effort in their respective chambers to make sure this critical funding was included in an otherwise extremely tight budget year. Most of the Texas Medical Center is in Rep. Davis’ district.  Other members of the Harris County delegation were vocal in their support of the project, and ultimately ensured Houstonians will have the access to care that they deserve.

The Continuum of Care Campus in Houston was also a recommended project by two interim committees before the session. After a long study, tours and briefings, the Houston project was recommended for this behavioral health funding by the Senate Interim Committee on Health and Human Services, led by Sen. Schwertner and vice chaired by Sen. Lois Kolkhorst; and the House Select Committee on Mental Health, which was led by Rep. Four Price and included local mental health champions Reps. Garnet Coleman, Sarah Davis, and Senfronia Thompson.

McGovern Medical School at UTHealth operates and staffs the UTHealth Harris County Psychiatric Center (HCPC), which is jointly owned by the State of Texas and Harris County. It is the second-largest academic behavioral health care hospital in the country and was recently recognized by the Joint Commission as a Top Performer on Key Quality Measures. Additionally, UTHealth HCPC demonstrates the value of academic and healthcare partnerships underscored by the Texas Legislature and HHSC in the new projects. More than 500 medical school students, residents and fellows – as well as more than 1,500 other students in fields including nursing, pharmacology and social work from several universities – currently train at UTHealth HCPC annually.

UTHealth HCPC has approximately 45 people waiting to be admitted at all times and even though Houston is one of the most populous regions in the nation, the closest state psychiatric hospital is more than three hours away.

“This funding will allow us to build a transformative model of care that will go to the very core of treating behavioral health illnesses. It will help us make a vital difference for these patients and their loved ones,” said Jair Soares, M.D., Ph.D., professor and Pat R. Rutherford, Jr., Chair in Psychiatry at McGovern Medical School at UTHealth and executive director of UTHealth HCPC.

With a focus on reducing rapid readmissions (those within 30 days) and getting better outcomes for super utilizers (those with four or more stays per year), this new campus should reduce the pressure on hospital emergency centers and the Harris County Jail, which has become the de facto regional behavioral health care provider, currently housing more psychiatric patients than all of the state hospitals combined. Harris County Judge Ed Emmett, the Harris County commissioners, Houston Mayor Sylvester Turner and Houston City Council members strongly supported funding for this needed infrastructure.

“The continuum model will be designed to address not only different levels of care but also to integrate the different types of care individuals need, including psychiatric, substance abuse and medical care. The continuum will allow McGovern Medical School’s Department of Psychiatry and Behavioral Sciences to continue its research into the causes and treatment of behavioral health issues, and to expand its training of the next generation of healers,” Soares said.

The new Continuum of Care Campus building, which will be constructed on what is now a parking lot adjacent to UTHealth HCPC, will incorporate the latest design concepts for a behavioral health facility.

“Bringing together experts in neuroscience and architecture, the building will be specifically designed and finely tuned to the unique needs of our patient population,” said Steve Glazier, COO of UTHealth HCPC. “Our intention is to create an environment that promotes safety for both patients and staff, helps to reduce stress and anxiety and enables patients to maintain their privacy and dignity.”