NSF-funded device is the only one of its kind in Iowa, handful in US 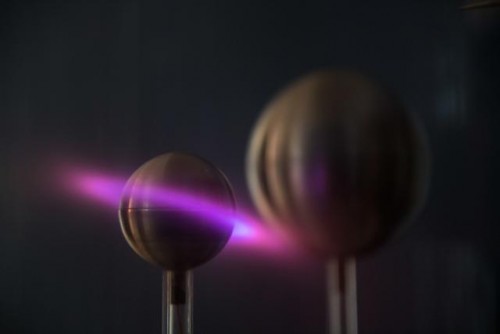 University of Iowa students have recreated in miniature Earth’s auroras, the dancing waves of color in the polar skies, by building a planeterrella, the only one of its kind in Iowa and one of just a handful in the United States. 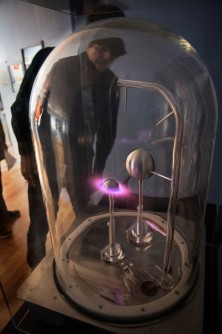 Using a knob, visitors can flip from viewing aurora to seeing Earth’s radiation belts—which were discovered by the late–UI space physicist James Van Allen—as well as ring currents, or swarms of ions in the magnetosphere that circle the Earth’s equatorial plane.

Newswise — If you’ve never seen the northern lights, you’re in luck: They’re on display courtesy of an exhibit at the University of Iowa.

UI students have recreated in miniature Earth’s auroras, the dancing waves of color in the polar skies, by building a planeterrella, the only one of its kind in Iowa and one of just a handful in the United States.

The planeterrella calibrates the same physical conditions that cause auroras by mimicking the interplay of magnetic and electrical fields, as well as atmospheric conditions, known to cause these shimmering celestial shows.

“This brings some of the wonders of space, which might be abstract or you may only see on the news, right here so you can play with them,” says Scott Baalrud, assistant professor in physics and astronomy at the UI who conceived the idea and supervised the student team that built the instrument. “I hope it stirs people’s curiosity about how the world works, how the universe works.”

The planeterrella is one of the centerpieces of the museum’s Hawkeyes in Space exhibit, which runs through mid-May and chronicles the UI’s history of space exploration, from designing and building the first American rocket launched into space in the late 1950s to scientists’ participation on current missions to Jupiter, Mars, Saturn, and interstellar space.

Using a knob, visitors can flip from viewing aurora to seeing Earth’s radiation belts—which were discovered by the late–UI space physicist James Van Allen—as well as ring currents, or swarms of ions in the magnetosphere that circle the Earth’s equatorial plane.

The planeterrella produces a vivid lightshow for each of these phenomena. The radiation belts appear to bathe an earthly-looking sphere in waves of purple and pink. The auroras band in a magenta halo at the top and bottom of another smaller sphere, and the ring currents wrap around the middle of the orb like the wispy rings on Saturn.

The UI’s planeterrella is a modern-day version of the original Terrella experiment built in the 19th century by Norwegian scientist Kristian Birkeland to prove his theory that auroras are formed by ionized gas (plasma) streaming from the sun and getting trapped in Earth’s magnetic field, causing electric currents in the upper atmosphere.

The planeterrella recreates the northern lights by using two spheres (representing the sun and the Earth), enclosed in a glass bell jar. The spheres each contain small magnets. A vacuum pump removes most of the air from the bell jar to mimic Earth’s thin upper atmosphere, and a power source creates an electrical field between the spheres inside the glass jar. The charged objects emit electrons, which electrify the small amount of remaining air in the jar, generating plasma.

When Baalrud got the idea to build a planeterrella in the spring of 2015, he obtained blueprints from a French company. But those were for a static exhibit, and Baalrud wanted one that people could manipulate themselves, as well as one that could be taken to schools and science fairs, a goal he had for the NSF grant. He recruited three students to help him.

The first to come on board was Rick Beckley, at the time enrolled as a master’s student in science education in the UI College of Education. He began to modify the French plans and envision how the UI’s version would work.

“Much of my time was spent making the actual parts for it, putting it all together, and testing it for different configurations,” Beckley says.

Next to join was Ryan Hood, a fifth-year graduate student in physics and astronomy.

“(Beckley) came to me and said, ‘I want to make a planeterrella.’ I had no idea what it was,” says Hood, who also earned his bachelor’s degree from the UI.

Hood helped locate some of the parts, including the base plate, vacuum pump, aluminum spheres, and large permanent magnets. And, to produce the necessary magnetic fields, Hood made sure the spheres could be split in half so the magnets could be placed inside them. He says he took great pride in one inventive twist: He molded a lip around the inside of the spheres so he could reassemble them with a minimally visible seam.

“I had never done a sphere,” Hood says of his creation. He’d manufactured other projects in the physics machine shop before, but the planeterrella components were a different challenge all together. “It was fun to work on.”

Zachary Luppen, a UI sophomore majoring in physics and astronomy as well as pursuing a certificate in museum studies, put on the finishing touches by adding the knob function that allows visitors to switch among the features and adjust the vacuum pump that maintains a constant thin air pressure. Luppen also is responsible for creating many of the other elements in the Hawkeyes in Space exhibit.

The students “were fantastic,” Baalrud says. “They pretty much handled all technical problems without a great deal of hand holding. They were really good at working independently and problem-solving.”

Beckley, who now teaches science at the high school in Wilton, Iowa, says he’s proud of what the group accomplished. He’s taking his junior and senior physics classes to see the planeterrella later this month.

“I think it’s a pretty big deal because there are just a half dozen in the U.S. that are working,” the UI graduate says. “It’s also a legacy for the university as well, with James Van Allen and the radiation belts. To be able to show that to the public, it feels good to be a Hawkeye.”