Media Note: Images and video of Mike Gore and technology used at the Musgrave Research Farm can be viewed and downloaded here: https://cornell.box.com/v/GoreDigitalAg

Newswise — ITHACA, N.Y. – Digital innovations in agriculture, including robots, drones and artificial intelligence (AI), are part of a new arsenal of tools plant breeders are using to feed the world’s population.

Plant breeding has been going on for 10,000 years, said Mike Gore, professor of molecular breeding at Cornell University, but technology – unmanned aerial vehicles (UAVs), robots, AI and machine learning – is revolutionizing the practice.

The Cornell Initiative for Digital Agriculture (CIDA) leverages digital innovations in agriculture to improve the sustainability, profitability, resiliency and efficiency of the world’s food systems.

Among other crops, Gore’s lab focuses on corn – including corn grown in upstate New York – and the development of variations that are best suited to the short growing season and weather conditions. His lab employs camera-wielding UAVs – drones – and four-wheeled robots to perform real-time diagnostics of scores of corn varieties at the Musgrave Research Farm in Aurora, New York.

Gore’s team – in collaboration with the lab of Ed Buckler, adjunct professor of plant breeding and genetics – is developing AI for the autonomous vehicles that can count individual plants, measure plant height and check individual leaves for disease, among other tasks. And he can perform diagnostics on the plant at any point in its growth process.

“If you had that capability,” he said, “then you’d know what plants to cross-breed before the pollen’s even been shed.”

By using technology to detect key traits in midseason, Gore said, he can perhaps develop more precise breeding methods – and shorten the breeding timeline “from six to eight years, to maybe four or five” as the technologies are developed.

He envisions a day when a robot or drone can not only facilitate rapid phenotyping, but also detect fungal diseases or weeds and immediately dispense a fungicide or herbicide in a precise dose, at just the right coordinate in the field. And while there will always be humans on a farm, Gore thinks a role-reversal could be in the offing.

“If we can train the robots, perhaps someday the robots will be training us to do very precise plant breeding,” he said. “We have more than 800 highly diverse hybrids in this field [at Musgrave]. Which one is the best for growing here, and why? Those are the questions we’re trying to answer. … We’re trying to closely model the biological reality of a plant. I would argue that, over time, robots can probably do it even better than human beings. That’s what we’re kind of on the cusp of right now.”

Developing a corn variety that’s best suited for upstate New York is one of many challenges Gore and researchers like him are tackling as the specter of feeding 10 billion people looms. 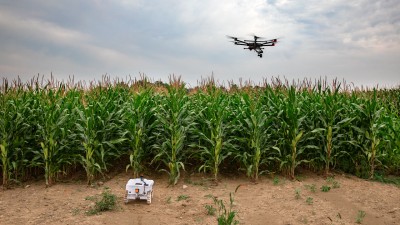 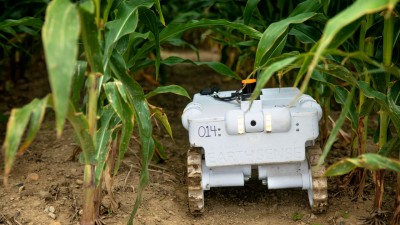 Caption: A TerraSentia robot, which is being trained to perform remote diagnostics on individual corn plants, moves between rows of corn at Musgrave Research Farm in Aurora, New York.