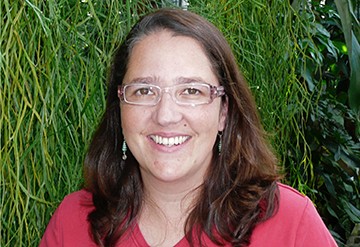 Newswise — AMHERST, Mass. – Plant cell biologist Magdalena Bezanilla at the University of Massachusetts Amherst has received a four-year, $600,000 grant from the National Science Foundation to further her award-winning research on fundamental processes of plant growth, in particular how molecules secreted by cells help to determine their outer shapes and patterns.

“Think of it as the difference between building a short round adobe house and a long, tall steel skyscraper. The shapes are very different in part because of the material that’s used and its original shape,” she explains. “This new grant will help us explore how the cell controls delivery of new building blocks of the extracellular matrix. In plants it’s a bunch of carbohydrates that form the cell wall and contribute to its function within a leaf, a stem or root.”

“In animals, secretion of extracellular matrix may lead to the formation of bone or an outer shell, for example, but because only a subset of cell types build these complex structures in a single organism, it can be difficult to study these processes in animals. But in plants, all cells build a wall. We don’t need to isolate specialized cell groups, so it is easier to study this in plants,” the biologist notes. All cells, whether plant or animal, use the same secretion process to pattern their parts and create their extracellular environment, Bezanilla explains. “So whatever we learn from these studies, we can see the parallels in other organisms. It’s the beauty of biology that you can look for parallels in simpler systems and begin to gain an understanding of these processes in more complex ones.”

Bezanilla says scientists have known for decades that proteins such as actin are important in cell-shaping processes, but exactly what they do and how they do it are not well understood. “The big question is, what is it about actin that is helping to control cell shape? In these studies we will address the role of actin in the secretion process.”

Undergraduate and graduate students in Bezanilla’s plant biology classes at UMass Amherst, including the many underrepresented minority students who attend summer institutes, will benefit from taking part in these studies because they will learn about gene transcription and translation among other topics, and receive training in RNA-induced gene silencing, fluorescent protein labeling, using DNA to transform cells, molecular cloning, microscopy and other laboratory techniques.

Specifically, Bezanilla and her students work with a moss species that provides a simple, fast-growing model plant for which the whole genome is known. They will manipulate the moss model by systematically altering the plants’ DNA blueprint to make minor changes in protein secretion, then evaluate what happens when proteins are altered one at a time.

“We ask, what is the protein doing, what other protein is it talking to and what happens when you remove it? In this way we can interrogate the system to learn how each part contributes to the whole,” says Bezanilla, who in 2010 received a career recognition award from the American Society for Cell Biology for her exceptional scientific contributions and potential for continuing a high level of scientific endeavor and leadership.